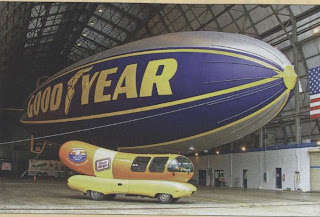 Exciting times in Akron. This photo (courtesy of Rubber and Plastics News - Nov. 17, 2008) features two of the longest living coporate icons together in one spot for the first time, despite the blimps being around since 1925 and the Weinermobile being around since 1936.

Speaking of Goodyear and Akron, their former crosstown rival Firestone, is rapidly fading into the history books. Bridgestone/Firestone has decided to drop the Firestone name entirely. (Bridgestone bought Firestone back in 1988 and moved the headquarters to Nashville.)
Posted by John at 9:53 AM 1 comments

The rheology of concrete and cements is always fun (i.e., a nightmare) to study. You have a reacting system made up of solid and liquid phases, giving off some heat for extra fun. Nowadays you can also find some polymer reinforcements too. To simplify the work, you get exposure to all the other rheological behaviors that you miss when spending most of your day on shear-thinning plastics. The exact ratio of water/solids is often not as precise as one use to lab procedures would expect, so this leads to measuring the rheology in the field.

UT Austin has a department devoted to just this subject - the International Center for Aggregates Research (ICAR). The have a number of publications available, some of them quite lengthy. The summary of 61(!) different workability test methods is great , but there is also a lengthy report (321 pages) on a new simple and portable rheometer.

I've done some work with cements here, and also installed some tile at home, so I know how much black magic and artistry there is to the area. Fortunately, cement has some fairly broad latitude in its working ranges and it can be foregiving. Unfortunately, that can also lead to disaster for the same reasons.
Posted by John at 8:51 AM 0 comments

This one blows my mind. Maybe the LHC has created some timewarp in Europe, as this battle has been going on for over fifty years!

Giulio Natta, of "Ziegler-Natta catalyst" fame, has still been fighting for patents on those cataylsts. And yes, he originally filed for the patents back in 1955. The Court of Appeals of the Federal Circuit just decided that the last patent, US 6,365,687, issued in 2002, was obvious. Keep that in mind next time you see Nobel-prize winning research.

Natta himself died back in 1979, and as the patent was assigned to Basell, he has no skin the game. Additionally, this technology is now so commonplace that it is in undergraduate textbooks and has moved on to second, third, fourth... generation constrained-geometry catalysts/cocatlyst systems. I'm not sure that there is much value to the patent any more. If a company is still using this 50-year old technology, it won't be doing so much longer.
Posted by John at 8:13 AM 0 comments

Following up on last week’s post, there is more to say with the “scientific method”. The last step – drawing a conclusion - is the linchpin where you and your experiment will succeed or fail.

Unfortunately, I am not aware of any ironclad method to draw good conclusions. Even Nobel-winning scientists have made boneheaded conclusions. Possible logical failures are immense.

If there is ever a controversy in science, it is because of the conclusions that people have drawn. As I stated last week, drawing a conclusion is where failing humans really stick themselves in the middle of the picture.

I’ve seen a ton of erroneous conclusions over the years, (including my own), but the most common ones that are more difficult to see are these:

1) Reaching one conclusion and stopping. This is especially true if the conclusion was what was desired or predicted.

2) Reaching the conclusion based on a single piece of evidence. Sometimes 1 piece is all you can get, but that is honestly very seldom the case. Additional evidence from different perspectives makes it more unlikely that the conclusion is wrong.

3) Believing that repeatability of the experiment is additional evidence of the conclusion. All that repeatability shows is that the result is repeatable and that someone should be able to reproduce your result. It doesn’t mean that someone else will reproduce your conclusion. You see this in the drug tests on professional athletes. Their initial urine is divided into an A and B sample. If the A tests positive, the same lab, using the same procedure, retests the B sample. Is it ever surprising that the B test comes back positive as well?

Maybe it’s summed up best by Richard Feynman: “The first principle is that you must not fool yourself -- and you are the easiest person to fool.”
Posted by John at 9:45 AM 0 comments

Let's get the legal issue out of the way first, then I can tie some science into this.

The US Supreme Court took a case this week regarding the right of a defendent to question the scientist/techniciam who prepared a scientific report used by the prosecution.

You can read the summary of the case and the oral arguments online.

The US Constitution guarentees the right to confront one's accuser's, but certain documents have been found over time to be exempt from this - such as ordinary business records, accounting books,... The question here is whether the lab report is such a record.

I certainly do not think that it is one for a number of reasons, some of which were raised: lab tests are not 100% reliable, the standard procedure(s) may not have been followed... All true, but I think they missed a crucial distinction.

Despite the reputation, science is very much a human effort frought with errors. The scientific method which everyone is taught is "hypothesis --> experiment --> data --> resuts --> conclusion(s), but no one is ever taught that the last link is the weakest. Drawing a conclusion is where a human being enters the picture.

As such, the lab reports at issue in this case are not just a business record, but actually have a conclusion in them and that conlusion is subject to error. Accounting books do not have a conclusion in them - both side are free to argue whatever they desire of them. That is the distinction, and this basis was dissappointingly not used in the oral arguements.
Posted by John at 7:48 AM 0 comments

The upcoming APS Fluid Dynamcis meeting has some interesting videos out. This paper has a couple of them showing the interaction between a hard surface and a viscoelastic drop. Lots of elasticity.
Posted by John at 2:30 PM 0 comments