Bayer is now starting construction on the world's largest buckytube plant. The annual capacity is only 200 tons, but it certainly is a high value product. Hopefully this will lead to lower prices eventually, as the uses are certainly out there, just not at the current price.
Posted by John at 1:03 PM 0 comments

Here's an unusual twist: a single element compound. Think about it. I'm not talking about an allotrope such as all the various forms carbon can take: diamond, graphite, buckyballs... Those "compounds" are made of nothing but covalent bonds and all the bonds are the same. This new compound is an element that is able to ionically bond to itself, a feat that would normally requires a difference in electronegativity between the atoms, and is normally considered an impossibility because there is just one element here. The article I linked to above is in Nature (one way or the other, it's going to cost you) while this article is a good review of not only this work, but also the history of boron research.

A few jobs back, I helped develop EKG electrodes. Being an adhesives guy, I helped develop the multiple adhesives that keep the electrode stuck to the patient's skin. Benig also a curious sort, I spent a lot of time reading about the electrophysiology of the heart - what all the peaks on an EKG mean. I also was fascinated that just as important was the gap (the interbeat interval) between the heartbeats. Common sense would lead you to believe that the gap should be constant, but that is not the case for a healthy heart. In fact a beat-gap for a healthy heart varies continuously and follows a power law, while an unhealthy heart has a steady beat-gap. (I am not aware that this knowledge is being used routinely by cardiologiest, as making the measurements in time consuming and takes some equipment beyond the standard EKG monitors.)

So now a new preprint shows that meditation, while slowing the heart, also induces steady beat-gaps. The gaps go back to their normal pattern after the meditation stops, but this study raises the question: is meditation truely good for the heart? At this point, the answer is unknown, so (repeat after me) "more study is needed!"
Posted by John at 10:30 AM 0 comments

Email ThisBlogThis!Share to TwitterShare to FacebookShare to Pinterest
Labels: EKG, health, off topic

Budding rheologists quickly learn about Heraclitus the Obscure. The Society of Rheology has taken one of his quips, "panta rei" "Panta Rei" (Everything flows) and made it the motto of the Society.

While it would be interesting to know what committee was responsible for giving him the description "the Obscure", I've been curious for quite some time what such a description was called. After all, Richard I of England was so blessed ("the Lionheart"), as was James, son Alphaeus ("the Lesser" - now that's a backhanded compliment!), Fredrick II of Prussia ("the Great") and countless others. I've found 2 nearly identical terms to describe the descriptors: epithet and epitheton necessarium. Surprisingly, in modern American English, an epithet usually means a racial epithet. So maybe the Latin option is the way to go. I don't want to be caught "dissing" Heraclitus.
Posted by John at 2:38 PM 0 comments 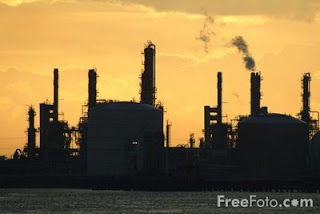 The Center for American Progress issued a report back in November looking at potential risks of terroristic attacks on chemical facilities located near large population centers. It's certainly thought provoking: I was surprised by how many bleach (sodium hypochlorite) facilities don't make it by electrolysis of salt water, and also by the amount of HF used in refineries as alkylation catalysts. Some of the proposed changes, such as for the bleach plants, could be made with little problem, while others, such as using soy alternatives to ethylene oxide would be more problematic. If you start changing monomers, you will change the resulting polymer to some degree. It is never a drop-in replacement.

The report is certainly alarmist to some extent: calling these plants the "most dangerous" is possible only with the understanding that they are near large population centers. No mention is made of the actual risk of the danger, such as how likely the plant is to have such a leak. If a decrepit and unguarded twin of one of these plants were located in the Great Basin, it wouldn't be on the list. Additionally, the "Vulnerabilty Zone Population" is the worst case, i.e., when the wind is blowing in the wrong direction.

The report also makes a strong case that railroad shipments of chemicals is (and will always be) a nightmare - extremely difficult to protect and move through populations centers of all sizes.

The subtitle of the report "What You Don’t Have Can’t Leak, or Be Blown Up by Terrorists" while long and wordy is accurate.
Posted by John at 8:47 AM 0 comments

I know, a pretty small topic, but getting bigger all the time. Over looking disolvable sutures which have existed for decades, and further overlooking the nasty marketing ploy of the "biodegradable" polymers that existed 20 years ago - a mixture of PE and corn starch, with only the carn starch being consumed and the PE being left as dust, large volume biodegradable polymers such as poly(lactic acid) are finally hitting the big time. Yes, you still need oxygen for these to degrade, so burying them in a landfill does nothing for the earth.

But on a smaller scale (and the point of this post), microbial degradation happens quite often on the surface of many plastics, and if the surface appearance is important such as with a work of art (free access), then even small amounts of degradation that wouldn't be a concern can become immensely important. Prior to reading this article, I knew that microbial life could live on the surface of plastics, but that it was because of the (consumable) dirt on the surface, not the plastic itself. While that is true, there are other options for life on clean surfaces. The plasticizers that are always migrating to surface of PVC become a food source once there, polyurethanes can be enzymatically degraded. Other examples exist, and in some cases where the polymer was applied as a "protective" coating to the work of art, it made the surface even more prone to attack. Again, not something that will help dispose of a pile of the polymer, but certainly something to be aware of in spots where the surface appearance is critical and duration matters.
Posted by John at 12:20 PM 0 comments

More on Dow and Rohm & Haas

A few weeks back I discussed that because of the low price of oil, the Kuwaiti's didn't quite have the finances to go through with the K-Dow deal, leaving Dow short of the cash it needed to close on acquiring Rohm and Haas. Dow promised that the acquisition was still going to happen, but this morning publicly declared otherwise (or at least stalling on the deal for a while) sending Rohm and Haas's stock down ~ 17% on the opening bell. Worse yet for Dow, R & H is now providing a stimulus package for some law firms and is suing Dow to complete the purchase.

Dow's stock, on the other hand, is basically unchanged.
Posted by John at 12:06 PM 0 comments 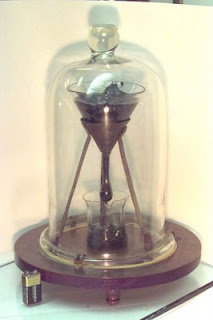 Not exactly faster than speeding bullet or more powerful than a speeding locomotive, nonetheless the ability of gravity to induce creep flow in extremely high viscosity materials is relentless. Ignoring this can lead to peril, such as when the ceiling collapsed in Boston a few years back. It can also lead to extremely long duration experiments such as the pitch drop experiment. While the experiment and the imponderablely slow motion (barely) captures the imagination in the ways that astronomical distances and geological time does, the links within the site lead to many further discussions on attempts at quantification of the experiment - no small task. Seasonal/monthly/daily temperature changes all impact the viscosity, as does the more recent addition of air conditioning to the building.

No mention of oxidation of the pitch. And since the stem is not of constant diameter, there is an element of extension in the flow field that is not captured. And given that l/d for the stem is less than 20, you can even argue that the flow field is not fully developed, thus invalidating the use of Poiseuille's law. But they have won an Ig Nobel prize, so I'm quite green with envy.
Posted by John at 12:49 PM 0 comments

Knowing all the work that has been done over the years in creating stimulus sensitive polymers, it's not surprising to me that someone was able to make a polymer that creeps like an inchworm, (free access) but it still is fascinating to look at.

I feel the same way with blown films lines - I could watch them all day along.
Posted by John at 10:52 AM 0 comments

Connections (with apologies to James Burke)

Dow had been planning a joint venture with Kuwait to be called K-Dow. (Kinda like F-Fed, I guess. And that makes me J-Spev!) Now all of the sudden, the Kuwaiti's are pulling out, most likely due to the significant drop in oil prices. But the story doesn't end there. Dow was anticipating some cash from their partners to close the deal, and had already promised that cash to their purchase of Rohm and Haas. So now that deal is in jeopardy as well. The R & H deal always seemed a little pricey to me, so I doubt that they could find another partner if that falls through. To the R & H stockholders, the cheap price of oil has suddenly gotten more expensive.
Posted by John at 1:39 PM 0 comments

If you have extra LLDPE film lying around...

...you might just want to build your own superpressure balloon. NASA has been doing so for 10 years now and is able to lift an English ton of equipment 100,000 feet in the air and keep it there for over 3 months. Depending on the rate of lift and descent, I'd be fun to send a person up, never mind all the extra gamma-rays and extreme cold. (The extreme cold is nothing - we've got a polar air mass blowing into town this week.)

Unfortunately, the site is lacking in all those nagging details of construction. How are the various sections of film adhered together? How is the tendon attached? Since the ballon is going to get extremely cold, "Gorilla glue" just won't cut it. I'd guess a silicone. I'm also suprised that the helium doesn't diffuse out quicker, even knowing that diffusion coefficients are inversely related to temperature.
Posted by John at 8:28 AM 0 comments