Polycarbonate (and BPA and Phosgene)

Polycarbonate is in the news quite a bit and even bigger in the blogosphere, so it might be worth a bit of effort to look at it a bit closer look.

Strictly speaking, polycarbonate is not just one type of polymer but is a whole family of them. The name simply indicates that the monomers that reacted to form the polymer did so by forming carbonate groups: 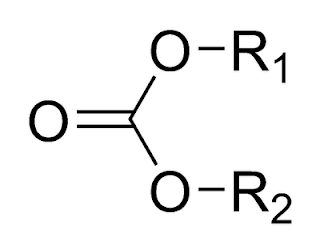 The R1 and R2 are generic and can be just about anything. That's why polycarbonate can refer to family of polymers. A common example is CR-39.

But in most cases, "polycarbonate" refers to a specific polymer that is typically made by reacting two monomers - bisphenol A (BPA) and phosgene. A given molecule of BPA will react with two molecules of phosgene on opposite ends of the BPA. Each of the reacted phosgene molecules will then add on another BPA molecule, which then react with more phosgene...alternating back and forth between BPA and phosgene. (The reaction is a little more complicated, in that there by products formed, and even the BPA needs to be modified initially in order to react with the phosgene. But since no one is going to be trying this on their own, I'll gloss over that.)

The resulting structure has none of the chemical properties of either BPA or phosgene,

which is a good thing: as bad as BPA seems to be, phosgene is far worse. It's a gas that was used in World War I as a chemical weapon. So why the concern about BPA in polycarbonate, and why not phosgene? No matter how carefully a polymerization reaction is carried out, some monomer remains unreacted. The polymer can only react with monomers at the ends of the chains and there are very few of them making it difficult for the monomers to find them and react. BPA is a solid at room temperature, so the unreact portion stays in the plastic only to come leaching out later. Phosgene, on the other hand, is a gas, so any unreacted portions are able to quickly volatilize especially with a little heat to help.

The most common tradename for polycarbonate is Lexan. In my mind, it's becoming a generic term much like Plexiglas is for polymethyl methacrylate. This might have contributed to "Lexan" being the most searched plastics on the IDES database in 2009. Or maybe it was because of the BPA scare.

But let's be perfectly clear on one thing here: BPA is not a plastic, it is not even added to plastic. It is used to make a plastic.
Posted by John at 12:46 PM