Travelling for work here is very sporadic. Sometimes it is constant, other times it is quite sparse. A few years ago I was in the constant mode and ended up seeing parts of Texas that I never thought I would see.

One stop was Gun Barrel City. There's something about that name that is so Texan in my mind. When colleagues found out where I was going, they asked if it was in the dry or wet part of Texas, to which I had to answer it was in the gun toting part of Texas. A little southeast of Dallas, the scenery was nothing to comment on. The large reservoir was pretty low, and certainly we have many more beautiful lakes in Minnesota.

On another trip, I was close, but never got a chance to see the Grassy Knoll. My meeting that day ran long and I had a plane to catch. I suspect it would have been a letdown, as afterall, it is just a grassy knoll.

The highlight of my "Tour de Texas" however, was a side trip: 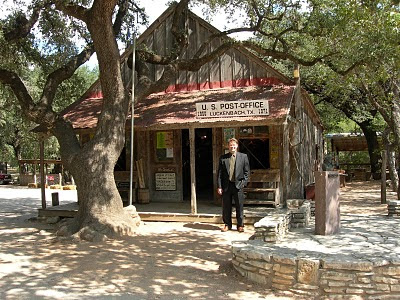 Luckenbach Texas, Population 3.
This would only be meaningful to country music fans, but the city is quite famous in the genre from the songs of Waylon Jennings (with Willie Nelson), Jerry Jeff Walker, and others in more recent times. The picture is me in front of the Post Office - there's a bar in the back of the building. The music hall is off to the left. And that's it for the town. Truly a town where if you blink, you will miss it.

It's in the Hill Country between Austin and San Antonio, a stunningly beautiful and serene part of Texas. I can't wait to return. I took some pictures, which despite being technically proper, just didn't capture the essence. I'm not posting them.

Lastly, if you like a puzzle, then consider this: what type of work (related to polymers) would possibly involve traveling the back parts of Texas in a suit and tie? (And yes Waylon, they were choking me.)

That's what I love about this job: I can never predict what will happen next.
Posted by John at 8:00 AM

You might enjoy the photography of Richard Reynolds. I've seen some of his pictures of the Hill Country, and they're beautiful.

That's for the tip. I did a quick search and will definitely have to spend more time oohing and aahing over them at home (where I have a much better monitor and much more time.)