Just like recreational drugs, being handcuffed is also not something I have any direct experience with. (Yes, I do very well with the "Never have I ever..." game). While the standard metal cuffs are still widely used, when the police are going after a large crowd, they go with what appears to me to be oversized zip strips: 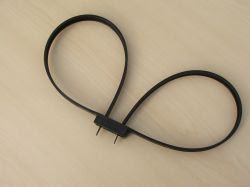 These have big advantages in that they are smaller and much lighter weight. A five-year old child can lift 100 of them in each hand, while 100 metal handcuffs would require boxes and a team lift.

Apparently they normally are made of nylon; I would imagine that this is used not only for the tensile strength, but also it's ability to create and keep the locking ratchet. Olefins should be strong enough for the tensile properties, but I would have doubts about the lock holding.

Sarlink has now announced that a client is producing TPV based flexicuffs. (TPV's are an olefin with a dispersed rubber in the matrix.) I'm rather surprised for a couple of reasons - not only because the tensile properties are lower than nylon (the modulus for nylon is about 2 GPa, while that for the chosen grade of Sarlink is about 100x smaller - 18 MPa)but also that the locking mechanism would be useless for anyone but the above noted five-year old. This is a 45D Shore hardness material and I really am having a hard time imagining that the lock would hold. But I also can't imagine that the manufacturer didn't do some extensive testing too.
Posted by John at 8:38 AM