Injection Molding Magazine (IMM) is generally in my “must read” category, but every once in a while they let something in that isn’t well thought out. The June issue has an article "Increasing Profitability through Equipment Upgrades and Replacement" is one such case. The “case study” (being neither a case study [1] or even a “theoretical scenario” [2] as is stated in the caption, but in fact being a complete fabrication) is an expansive table that can be by and large eliminated. Take a look: 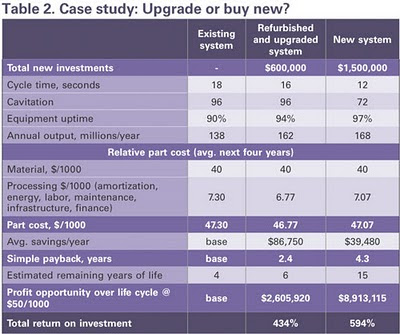 All sorts of wild, unexplained-in-sufficient-detail assumptions are being used in creating the table, but all-in-all it can be reduced to merely the second line: cycle time. The cycle time of the new machine is 2/3 that of the existing system (12 seconds vs. 18 seconds). Everything else is largely a wash (as presented). There is no need to do a sensitivity analysis to see how much the outcome depends on changes in the assumptions – the cycle time is clearly driving everything, meaning that if you were to buy the machine, you better hope and pray that you WILL achieve the new cycle time or you will have gained nothing.

Further hurting the article is that the table lists time to payback, widely known to be flawed tool for economic analysis. (How come the payback for the case of keeping the existing system is “base” and not “0”? Because 4.3 years doesn’t look as good as 0 years?)

One other serious flaw is that the author completely ignores that the machine is merely one part of a larger system – higher throughput in the machine could require additional investment in machinery/labor both before and after the molding machine. Optimization of a system is achieved by global optimization and not by summing isolated local optima, something that is covered in undergraduate courses on multivariable calculus.

Fortunately for IMM this was a contributed article from an equipment manufacturer trying to sell equipment and not from their internal staff, but it still reflects poorly on the magazine that such shoddy article appears within their output. Economic analysis of equipment upgrades is far more complicated than was presented here. The simplistic analysis presented here is misleading and wrong.

[1] A “case study” would be a retrospective examination of actual events that have already occurred.

[2] A “theoretical scenario” is a redundancy (all scenarios are theoretical)
Posted by John at 8:20 AM

Hi! Thanks for the great information you havr provided! You have touched on crucuial points! window patching machine