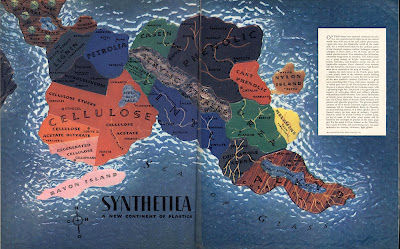 This picture of "Synthetica" has been floating around since it was first published by Fortune magazine back in 1940, and I just saw it for the first time in quite some time. You can access a larger version here. The map promotes the strange new world of plastics, trying to show relationships between the different countries.

1940 was a wonderful time to make the map as polymers were beginning to become successful, but Ziegler-Natta catalysts were still yet to be developed and so the map is totally lacking in polyolefins. Instead the map is filled heavily with thermosets (urea, phenolic, melamine...)and other materials that are still used to day, but nowhere near the volumes of the commodity plastics - olefins or PVC or PET. Even nylon is just shown as an emerging island. And despite this shortfall, people still saw this immense potential, still some 25 years or so before "The Graduate" came out.

I also love the compass showing the elements N, H, C and O instead of N, E, S, and W.

That picture was drawn 70 years ago. What would be the reaction to people 70 years from now of a map of today's industry? Will the big volume olefins still be the biggest (even if sourced from non-petroleum)? Will everything be further fragmented much as PE has become HDPE, LDPE, LLDPE, UHMWPE, PEx, and PE-copolymers...? How will our ability to control structure and relationships within and between individual molecules change what can be achieved, even with something as simple as PE?
Posted by John at 11:12 AM