The Tour de France starts tomorrow, so it is perfectly appropriate to discuss a bicycle: the Delta 7 Isotruss open tube frame. This doesn't look like anything I ever raced on: 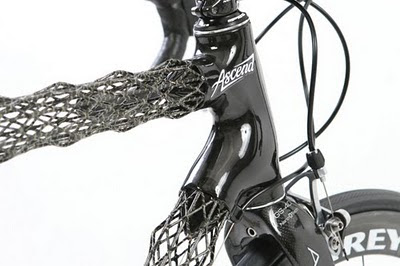 and I've yet to see a European pro ride one either. Besides looking like an expensive cheese grater, it doesn't seem to provide any significant weight reduction. The frame is listed at 1000 g /2.1 lb (who's doing the conversions here? That should be 2.2 lb!) and is compared to the carbon composite frame Lance Armstrong rode in the uphill time trial in the 2004 TdF, which weighed 907 g / 2 lb. Granted, time trial bikes can be stripped down extensively as they are only ridden for relatively short distances (50 km or less), and in the case of an uphill time trial (up the infamous L'Alpe d' Huez no less), I'm sure every conceivable microgram of extra material was eliminated, so this is probably not a completely fair comparison.

More important than weight considerations however, is the issue of drag. Run this through a windtunnel, ideally with and without a ride and see if all those exposed edges don't cause a big increase in drag. Keep in mind that drag is far more important than dead weight. The mass of a nonrotating part is only an issue in acceleration (or on an uphill). Once the acceleration is over, the magnitude of the mass doesn't matter, and can even be helpful on a downhill. On the other hand, drag is always there, constantly resisting any forward movement - uphill, downhill, accelerating or even at constant velocity. Drag is the true enemy, not mass.

You can read more in the March 2010 issue of High-Performance Composites, which is also the source of the picture.
Posted by John at 9:47 AM