A new PR blurb from the IKV - Aachen about detecting individual sublayer thicknesses in multilayer films is short on details about the technology used. It's somewhat disappointing, but it really doesn't matter to me as it pretty clear that they have not solved the most fundamental problem in looking for defects on film lines.

Plastic films and the equipment to make them have been around for some time with few significant changes. Whether processed as blown or tentered film, at some point after the orientation is complete, some equipment is used to measure the film thickness. The simplest gauges just measure the overall thickness, while more sophisticated equipment such as is disclosed here, can measure one or more individual layers in a multilayer film. Regardless of the equipment used, they all suffer from a common problem: the equipment only examines a small spot on the film. In an attempt to cover the entire width of the film to look for side-to-side variations, the equipment moves back and forth across the width of the film to look . While this initially seems to be satisfactory, the equipment is only still only examining small section of the film. Let me show this with a picture: 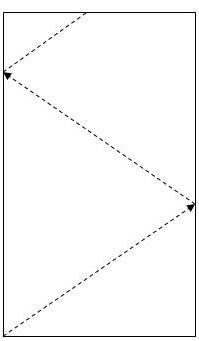 The situation would be much improved if the scanner would examine the full width of the film at the same time. Then the area examined would simply be determined by the measurement time and the film speed.

These problems are widely known in the film industry, so if someone had AFFORDABLE equipment to scan the entire width of a film at once, they would be certain to mention it in their press release. Keep in mind that some film operations can produce films that are 8 meters wide, so this is not a small challenge.
Posted by John at 8:07 AM

My husband divorced me and went after his ex and left me heart broken for 2 years. I have been playing the lottery for some years before I got married and I have never won any big amount. I continued to play the lottery but I couldn't win more than $500 dollars until I was introduced to Dr Amber that is a strong Haiti spell caster. I had a chat with him via +18084815132 telling him what a mess my life has become. He encouraged and promised to get my man back for me and to help me win the lottery. There were specific instructions that was passed to me by him which I adhered to as he prepared the spell for me that brought back my husband within 36 hours and he gave me some sure numbers to play the lottery game. I used the numbers to play the lottery and I was declared the winner of Ten Million Dollars and all this happened within a week after I knew Dr Amber. It doesn't matter what you are going through in life Dr Amber is here to help. You can visit his website: amberlottotemple.com or E-mail: { amberlottotemple@yahoo.com }.