One of my less memorable classes in my undergraduate education was "Chemical Reactor Design". Despite being taught by the mostly highly esteemed Rutherford Aris, I just don't think I got much out of the class except for one key concept: that the heat generation curve (plotted against temperature) is S shaped, while the heat removal curve is linear. Steady state operation is achieved at the intersection of these two functions, as as you can see in the figure below, this can occur at up to three locations. 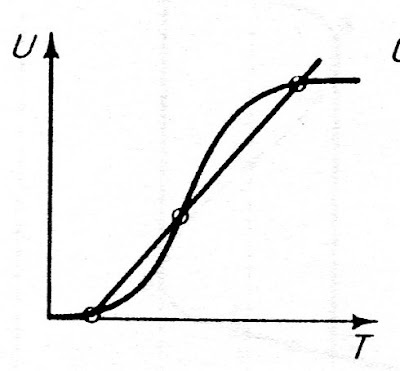 According to another prof who occasionally led the recitation class, this can occur in a candle.

I bring this up because I just saw a report on a computer simulation of a burning candle. I wonder if they saw the two steady states, or was the prof just blowing hot air :) Given the little bit I know about modeling, it could well be that the model was given some initial conditions that are sufficiently close to the end result that the model would never diverge to find a second state. Still, I am curious if the two states of a candle is just an old ChemE tale or reality.
Posted by John at 9:23 AM