There's a new paper out that studies blur and it's affects on human perception and distance. This is rather important to nearly all engineers and scientists as we often spend time looking at photographs taken from optical and electron microscopes. In both these cases, we really are looking into a new world and don't have many (proper) clues to help us find our way. The scale bars that show distance across the image are nice, but are not enough.

The paper (open access) studies the impact of blur in an image and how we perceive the image. Blur arises because the depth-of-field [1] is not infinite. Depth-of-field increases when looking through small openings and also as distance increases. But with photographic tricks (and of course nowadays some skilled Photoshop work) it is possible to either introduce blur and change perception, or remove blur and change perceptions in the other direction [2].

Here's a couple of pictures from the paper of what appears to be a miniature scene: 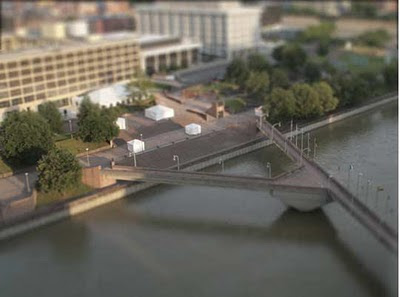 while the actual scene is this: The paper has a number of pictures of fractured rock surfaces which could well pass for a number of different microscopic pictures that I first mentioned and show the dangers of being mislead by our own eyes.

[2] Hollywood could certainly put these techniques to great use and thus avoid the whole "Oh that's just a guy in a Godzilla suit crushing small buildings" thing. My personal favorite is "Titanic". Every time I see that movie it looks like a toy boat floating in a bathtub. James Cameron waited 20 years for technology to advance enough so that he could make Avatar. He should digitally re-edit "Titanic".
Posted by John at 8:59 AM

Email ThisBlogThis!Share to TwitterShare to FacebookShare to Pinterest
Labels: testing