A Tale of Two Tenters

It was the best of times, it was the worst of times...Let me stop right there before Charles Dickens' ghost comes back and starts haunting me this weekend.

I ran across this old relic (an umbrella) 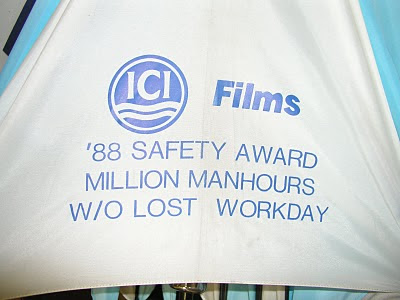 and it reminded me of my choice between two tenters [1] that I once made. I was finishing school and had begun interviewing. One of the positions was in Hopewell, Virginia at the ICI PET film plant. I was given the umbrella at the end of the day when the rain that had been threatening all day finally let loose. My host gave me the umbrella to keep my suit dry, although the rain was bouncing off the parking lot surface so hard that it did little good. Regardless, I still got a nice keepsake that only now is starting to fail. (Also, a million manhours without an OSHA reportable injury? That is impressive.) ICI is no longer which I still find shocking since at that time it was the 4th largest chemical company in the world. I think the PET plant is still operational, now being run by DuPont.

The other position was at the Hercules PP film plant in Terre Haute, Indiana. Hercules is also no longer in existence, but the plant still is. In this case, Applied Extrusion Technologies bought it, and looking at the satellite pictures, seems to have expanded it considerably. For a number of reasons, this is the job that I took.

I always wonder how life would have turned out if I had taken the other job. It is truly impossible to say. I left Hercules after 10 months. Some of the reasons for that may not have existed if I took the ICI job.

A coworker is of the opinion that life is made up of only about 5 serious choices (Which college? Which career? Which spouse? Which job? Kids, yes or no, and then how many?) and the rest is fluff. Certainly those choices are the big one and few people appreciate the simplicity of his viewpoint, but when I remember the tiny little twist one day [2] that allowed me to meet my wife, I can't help but feel that the butterfly effect is still mighty significant.

[1] Plastic films are made either by the blowing a large bubble and slitting it, or by the tenter process. In the latter, the film is stretched first in the machine direction by using rollers that a running faster at the output that at the input. This film is then fed continuously in the tenter (the second "t" is silent), the piece of machinery that stretches film in the cross-direction by grabbing it on the edges with clamps that are on a ever widening track.

[2] My advisor was out of the country and a secretary in the department office was typing up a paper for him (yes, on a typewriter!). She couldn't be sure what one of the handwritten words was, so she called me. I went down to the office, deciphered the word, and turned to leave. At the same moment that I opened the office door, she was walking down the hall right past the office...
Posted by John at 9:37 AM