For those of us in the US, this is a short work week. Thanksgiving is this Thursday, and Friday is a widespread holiday [*] for most businesses - anything except retail stores. The traditional meal for Thanksgiving is a turkey, and this where we can begin to tie plastics in to the topic.

While I've certainly had turkeys that tasted like plastic, this is a more direct approach. A processed turkey can be difficult to handle. They are heavy, coated in a fairly slippery plastic that might be wet from condensation, and also fairly well rounded with few good areas to grip them. In order to allow for easier handling, they are most often put in plastic netting, something that I look at with a little more intimacy than the average person, as for a very brief period, 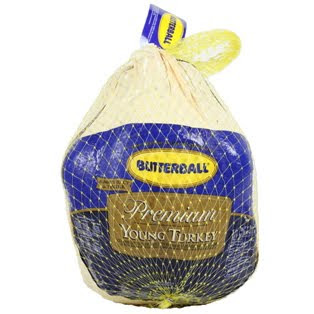 for you see, I worked very briefly for a company that made plastic netting, some of which was used on turkeys.

There are a wide range of options for making netting, although they all have movable extrusion dies. The netting discussed above, also used for bagging onions and other food items, is made by extruding multiple strands through two coaxial circular dies that are rotating in opposite directions. The strands are oriented at an angle to the machine direction some too, which gives the net the characteristic diamond pattern. Where ever the strands meet, they stick and the netting is formed.

Another option is to use an annular die, similar to what is used to make tubing or blown film. The difference is that the movable part of the die has slots cut into it and this part then moves back and forth against the rest of the die. When the movable part is against the die, the polymer can only flow through the slots, thereby creating the downweb strands. When the movable part retracts, the polymer flows through the entire annulus, creating the crossweb strands. Needless to say, this is quite a noisy operation, what with the die opening and closing with high frequency. This netting can be oriented with a tenter just like biaxial films are.

Yet another option is to just make a circular film and poke holes in it while it is still soft. Seen orange snow fence?

Now you know how that is made.

[*] Strangely, the Friday after Thanksgiving is called "Black Friday". Normally a descriptor used for some tragic occasion, this is actually considered a good name as so much shopping is done on this day that retailers are finally able to change financially from being in the red for the year to being in the black - or least that is the urban myth. Regardless of the veracity of the name, everyone knows that it is the busiest shopping day of the year.
Posted by John at 8:57 AM

and I see that Black Friday is coming up..

I enjoyed your blog on Plastic Netting >>>

for you see, I worked very briefly for a company that made plastic netting, some of which was used on turkeys. velvet pillow cases , ac kambal price ,