Shrinkage is a constant battle in polymers. In thermoplastics, molten plastic always has a lower density than the corresponding solid, thereby guaranteeing shrinkage as the part cools (molded, extruder or whatever). With thermosets and other reactive systems, shrinkage also occurs but as the result of a changes in the separation between molecules. Prior to reacting, the molecules are attracted to each other by van der Waals forces. The attraction is relatively weak and so the distances are relatively large. Once reacted, the molecules are covalently bonded and kept at a distance that is much shorter than the van der Waals forces kept them. The result is again shrinkage, all the more so if the heat was needed to initiate the reaction.

One way to minimize the shrinkage in a reactive system is to use monomers that polymerize through ring opening. In such a system, the formation of the covalent bond along the backbone of the resulting polymer is somewhat canceled by the covalent bond broken in opening the ring.

This then raises the question: if breaking one ring is good, would breaking two rings be even better? The answer is yes, but a monomer with two independent rings won't do the job. Instead, the two rings have to have a common element, so as this monomer, a spiro-orthocarbonate: 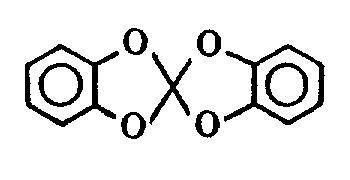 Spiro-orthoesters and other similar materials can also be used, basically anything where multiple rings are joined at a single point. Polymers prepared from these monomers can show no shrinkage and in some cases, even expansion upon polymerization. In the polymerization, the two rings in the center of the molecule are broken at the same time, while only one covalent bond is formed during the polymerization. The net result is that one of the short covalent bonds is replaced by a van der Waals bond - hence the expansion.

This technology was first realized back in the 1970's, and despite some active patenting, I am not aware of any commercialization. I imagine that the monomers are too expensive to be useful in most applications.
Posted by John at 8:41 AM

There is also our famous QA team, checking on buy essay for college every essay and paper written by our writers before sending the final draft over to a customer.