Bicycle Racing is a Team Sport... 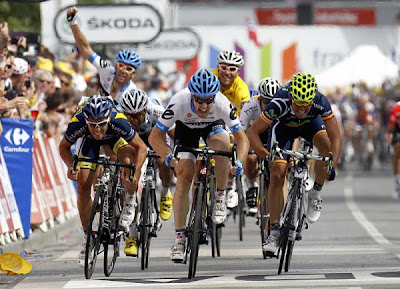 Source
This photo was take at the end of the third stage. The guy in white, front-and-center, (Tyler Farrar) is about the cross the finishing line and win the stage. That's fine and nice, but my focus today is elsewhere. Who can you see with a fist in the air celebrating the victory? A teammate, Julian Dean, who helped lead him up to the line, keeping Farrar out of the wind. In doing so, Dean destroyed his own chances to win.

But look further again [*]. Right behind Farrar is Thor Hushvold, another teammate of Farrar, who, while WEARING THE YELLOW JERSEY AS OVERALL RACE LEADER also helped lead out his teammate. You can't see it here, but the TV camera yesterday caught it perfectly that Hushvold too was also celebrating Farrar's win before Farrar did. By the way, Hushvold normally wears another jersey all year long unless he's wearing the yellow jersey - it's call the WORLD CHAMPION'S JERSEY.

So let's put this all together. The Cervelo team decided that Tyler Farrar had the best chance to win that day, so everybody, including the World Champion and Yellow Jersey all gave up their chances to win and helped Tyler Farrar win.

Bicycle Racing is a team sport.

[*] Isn't this beginning to remind you of the picture analysis I discussed yesterday?
Posted by John at 2:33 PM