One Pinpoint of Light

Since today is the Fourth of July (Independence Day in the US), a picture of stars is perfectly appropriate. This one is courtesy of the Astronomy Picture of the Day website, a site I highly recommend. Most pictures are of jaw dropping nebula and such, but this one from Friday actually shows an experimental observation, and how one little dot of light changed humanities entire outlook on the universe. 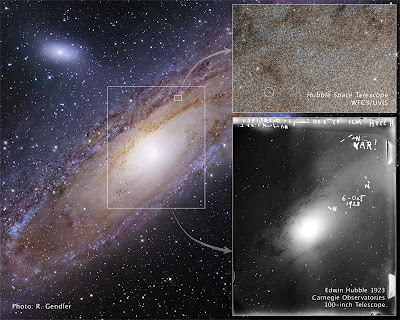 The famed astronomer Edwin Hubble (namesake of the Hubble Space Telescope) was looking at a couple of images of the Andromeda Galaxy. Some of the small pinpoints of light were nova that faded over time, and these are marked in the black-and-white photo in the lower right by the letter "n". However, one of the suspected nova, relabeled as "VAR!" turned out to not be nova at all, but a variable star (one's who intensity changed over time) and not just any variable start, but of a particular class called cepheids. These stars have a intensity that is a function of periodicity of the variability. If you know the period of the variability, you know how bright the star at a standard distance, and since you can measure how bright the star is on earth, you can then calculate the true distance of the star.

So from this small prick of light, it was then possible to determine the distance to the Andromeda galaxy. This was extremely important as it showed for the first time that the galaxy was outside of our galaxy, and this then led to the idea that the universe is filled with galaxies. All that from a small pinpoint of light.

Astronomy has always fascinated me because of the difficulty of making the measurements. No one can go to a star or a galaxy to observe them first hand - we are stuck on the ground in a little planet that doesn't seem to be remarkable in any way, looking at little deviations like this that most of us would never even think are significant at all. And so astronomers have to compensate for this with cleverness and creativity.

As polymer scientists and engineers, can't we do the same? Instead of constantly relying on all the (comfortable) trappings of our instruments, what can we find out if were to do some boring grunt work, looking at for a tiny little datum somewhere in a massive field that could change our entire outlook?
Posted by John at 6:44 AM