What probably draws me the most to polymer science and engineering is the (apparent) contradictions that show up so often, whether it is rod climbing (the Weissenberg effect), 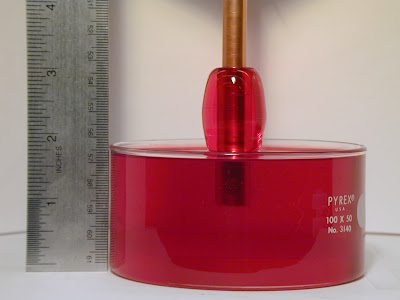 polymer demixing, or any of an endless number of other unexpected pleasures.

I recently ran into a new one: to avoid crosslinking in a polymer, an excess of crosslinker is added. I won't get into the details too much, but it involves a 1-part, moisture-cured, hydroxy-terminated low-molecular-weight polymer that reacts with a tri-functional crosslinker. Now if one group of the crosslinker reacts with a polymer segment, the molecular weight and viscosity of the material increases only slightly, an entirely acceptable outcome. If two groups react, the molecular weight has now doubled. And if three groups react, the a networked is formed and the entire material has set up, an entirely undesirable result. Keep in mind that there will be distributions of reactions in the container, with some of the crosslinkers being unreacted, mono-reacted,... So in order to decrease the odds of a crosslinker reacting with three polymers, extra crosslinker is added.
Posted by John at 8:55 AM

Email ThisBlogThis!Share to TwitterShare to FacebookShare to Pinterest
Labels: polymers