One of the few (make that exceedingly few!) ways in which I think biochemists have better vernacular than chemists is when dealing with macromolecules and the materials that are used in their biosynthesis. Specifically, the use of the word "residue".

Proteins are synthesized from amino acids, but the process is a condensation reaction which removes a molecule of water from each amino acid. As a result, the amino acid that enters the chain is similar, but not in fact exactly the same as what is after it is part of the chain. The amino acid monomer is now referred to as a "residue", since it is the residue of the polymerization. This picture of cysteine and the cysteine residue should make it clearer. 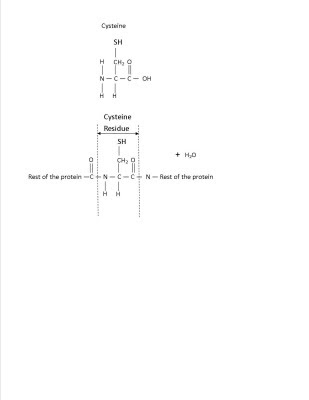 Strangely, I don't think I've seen that language used when speaking of synthetic monomers and polymers. Ever heard of "ethylene residue" to refer to a repeat unit of polyethylene ?[*] Sure, that is an addition reaction, but is it any better for condensation reactions? Every heard of "terephthalic acid residue"?

I'm not going to start a one-man effort to change the world, but it this is something that we should all be aware of, and consider the use of "residue" if appropriate in discussion of polymers and their monomers.

[*]...which completely overlooks that the repeat unit in the final product is actually methylene - CH2
Posted by John at 8:29 AM