A Method for Green Washing

Method Products launched a press release on the 15th headlined by "Method Unveils Breakthrough Bottle Made of Ocean Plastic"(emphasis added), and by "Ocean Plastic", they state "a bottle made out of plastic collected from the North Pacific Gyre".

The only problem is that the North Pacific Gyre, the worst of the Gyres, has a plastic density of 5.1 kg/km2 according to research cited in Wikipedia. Assuming that an empty bottle weighs 100 g (about 4 oz.), then a boat would have to trawl an entire square kilometer and collect every single piece of plastic in it in order to make 51 bottles [*]. Further, keep in mind that collecting these plastics pieces requires a very fine net and a slow moving boat.

So did Method Products and their partner Envision Plastics actually use a boat, all the while generating CO2 to collect all this plastic? No, of course not. Instead, they

"... tapped into a network of beach cleanup organizations, particularly in Hawaii. Hawaii is of the most remote land masses on the planet, and happens to sit at the southern edge of the Gyre. Because of the ocean winds and currents in the region, much of the plastic from the Gyre ends up washing up on the beaches of Hawaii."

In other words, they collected plastic on the beach, called it "Ocean Plastic from the Great Pacific Gyre" and used that instead. How is this a "breakthrough"? How is it that no one seems to be calling them out on it? Sure, it is great that the plastic is being collected and recycled, (plastic that has no business being in the ocean in the first place), but to hype it as Ocean Plastic? That's where I have to draw the line. There are plenty of people working quite hard to actually provide true "green" products (yours truly included) and to see this junk get a free pass is quite maddening.

[*] Another estimate of the plastic in the Gyre is 8 m2 per km2. Any way you look at it, it s a very small volume, but people seem to imagine it looking like this: 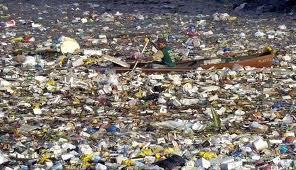 If it actually did look like that, the economics would be entirely different, although I certainly would prefer that the economics stink rather than having a problem truly that awful.

brinkka2011 says: thank your for your post and the rest. you know..

I saw a map that showed the current as an elongated oval across most of the northern pacific. Since it touches islands with little population but high levels of beach litter, plastic included, wouldn't the beach litter come from the Gyre?

@Anonymous #2: No one knows how big the Gyre's are. The statements such as "twice the size of Texas" that are very common are not supported by strong data. That would make it very difficult to state that this plastic is actually from the Gyre. From the ocean? Sure.

More importantly though, is that the Gyres are made up of numerous small (millimeter sized) particles, not large items, and that is what behind a large amount of the concern over the Gyres. The small particles are much more problematic than large items, so for Method to get good publicity from picking up large pieces of plastic on a beach (a small but visible problem) instead of filtering out small pieces of plastic in the Gyres (a large but nearly invisible problem) is "greenwashing".

So useful and informative post. I think it will be so helpful for waste management.