Some serious rheology discussions today on dynamic mechanical analysis (DMA) in oscillatory shear, and to some degree, this will followup on some of the issues about the multiple requirements placed on a water bottle that I discussed a few weeks ago. Be forewarned. I ran these 'quick and dirty". PET picks up water, so measuring PET rheology is best performed on samples that are either dried or exposed to a known amount of moisture depending on what your needs are. I did neither - the PET came from recently used Fiji water bottles and a Gatorade bottle. Given this, I would assume that the bottles were at a constant and equal loading of water (although certainly not uniform throughout the walls of the bottle [1]), but I have no data to support this assumption. Both bottles had the "1" recycling code, so I took that as truth that the bottles were PET and without significant additives such as plasticizers. (Don't worry, if a customer was paying for this work, I wouldn't be working with these assumptions.)

In a nutshell, I ran temperature and frequency sweeps on the samples, then used time-temperature superposition (TTS) to generate the master curve for 280 oC (only a very small portion of it as you will see). The samples were from 2 different sizes of Fiji water (500 ml and 1 l) and also a 593 ml Gatorade bottle (G2, orange flavor if you want all the bloody details). The storage and loss moduli are shown below for the Gatorade bottle - the results for the Fiji water bottle were qualitatively similar. 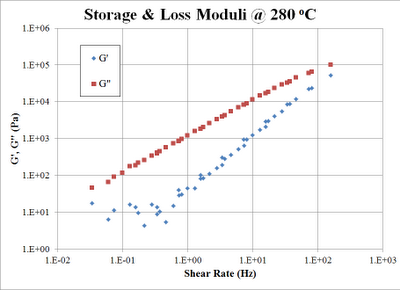 Clearly this is the terminal zone. The loss modulus, G" ("liquid" component) dominates the storage modulus, G' ("solid" component). The other region of the modulus curve where there is a similar slope is the transition to glass, but there G' > G". The slope of G" is 1 which is also a good match to theory. You can also see that at the very low frequencies, the data is a little noisy.

The next plot is a little more interesting as it shows comparisons between the viscosity of the three bottles. 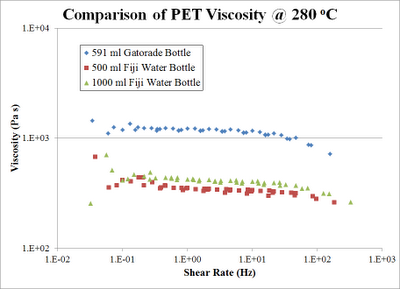 I went with viscosity curves for the comparison since there would only be three of them, rather than the 6 curves needed if I kept going with the G' and G" curves. The Fiji water bottles are pretty much the same, but the Gatorade bottle is much more viscous. The flatness of the curves also is what would be expected for terminal zone behavior and gives us the zero shear viscosity, although the Gatorade bottle is just beginning to show small signs of shear thinning.

I'm not surprised with these differences, as if you've touched both a Fiji water bottle and a Gatorade bottle, you know that the former has a softer feel and look to it than the Gatorade bottle does. PET is a funky polymer as it is semicrystalline, but the crystallization usually occurs as a result of orientation in the processing, and not just from temperature alone. That gives you two levers to play with in forming the bottle and creating a certain "look" with it. These characteristics are also something that the manufacturer is looking for and are additional requirements beyond the basic functionality of the bottle itself.

[2] If you are not familiar with DMA, and TTS, you can get some the needed background at this site. Don't look at < a href="http://en.wikipedia.org/wiki/Time-temperature_superposition">the Wikipedia article - it's like most of their mathematics articles - great for a review but horrible for learning from. I've still yet to find a great site on the web for this stuff. Why can't someone explain what G' and G" are on the same page as TTS? The concepts flow (pun intended) togehter quite nicely.
Posted by John at 7:02 AM

We tailor each essay and deliver it as per your instructions. The days of submitting sub-standard assignments to your tutor are over. Besides https://essaysrescue.com/masterpapers-review/, the customer support team is available 24/7, with dedicated representatives offering speedy assistance and support services.