I generally do believe that a picture is worth a thousand words (or more), but sometimes, they can be misleading. Here's a perfect example of an image in a recent research paper (open access). 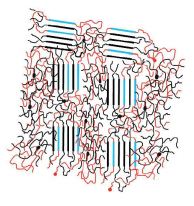 What you see is an iconic model of semicrystalline polymers – the famous "fringed micelles" - so upon seeing it, I immediately thought that I knew what the research was about: the crystallization and possibly the mechanical properties of semicrystalline polymers. I was wrong. But first some background: The image is made up of two principal components, the crystalline fringed micelles (the portions with multiple straight parallel lines) and the amorphous regions (the portions with the squiggly lines). Whole books have been written about how the volume proportions of each region can be influenced by molecular weight, thermal conditions, additives (particularly nucleating agents), externals stresses or strains, solvents, etc. Yet other books have been written about how the details of the structure (tie molecules in particular, stands that run out of one micelle and into another) influence mechanical strength, and I won't go into those details today. These subjects are quite broad and still actively researched, so it wasn't out of place for me to prejudge what the research was about.

But in fact the research was actually looking at the mechanisms of photo-conductivity in poly(3-hexylthiophene), (P3HT) which beside being conductive, is also a semicrystalline polymer.

(Notice the alternating pattern of single/double bonds? That conjugation is why the material conducts.)

The researcher found that the existence of the crystalline and amorphous regions in the solid is critical to conductivity. The absorbed photons created a charge separation, with the electron being trapped near the crystalline/amorphous interface and the hole being in the crystalline phase. Lower molecular weight materials, being mostly crystalline, do not have both of these regions and therefore lower electrical activity. The results were able to explain a wide range of conductivity results that had been previously reported without explanation.

Hat tip to Matteo Cavalleri (twitter @ physicsteo) for the lead.