As I've mentioned before, plastic garbage has no business being in the ocean (or forests, fields, etc. for that matter). With rare exceptions [1], humans are to blame for releasing plastic into the environment. The plastic did not get up and run into the ocean all on it's own. As much as I hate posing dichotomies [2], in this case there are basically just two approaches to "solving" or preventing the problem. One approach is to ban plastics or at least some plastics, such as the bag bans occurring around the world. The other approach is to change human behavior so that humans prevent the release of the plastic into the "environment". What is somewhat strange about this dichotomy is that the two sides are not equal in effort. Bag bans are in the news constantly, but little is being done to change human behavior.

You see this uneven dichotomy in a wide range of other "problems". Guns for example, have one side attempting to ban them while little is done by the other side to prevent their use in crime. Drinking and driving is also being ever increasingly criminalized without an equal increase in preventing it.

The only example that I can think of where the forces are reversed is with matches. Here in the US, we have had a decades-long, public-ad campaign featuring a cartoon bear (Smokey the Bear) who's tagline is "only you can prevent forest fires". 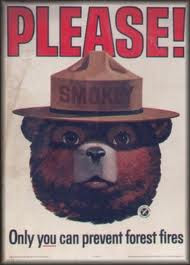 No one is actively trying to ban matches - the focus is entirely on changing human behavior to prevent fires.

The effectiveness of Smokey's campaign (he and his message have extremely high recognition in the general public), efforts to change human behavior can be successful. So why aren't we doing this with plastic bags and other forms of plastic pollution?

I bring this up as both the Plastic New blog and the SPI blog, In the Hopper have recently discussed the marine pollution conference that occurred in Dubai. While I commend their efforts and desire for success, unless the programs are on the scale of a Smokey the Bear campaign, they will likely be too little to change anything.

[1] A variety of natural disasters can unintentionally introduce plastics into the environment, but these events are small and infrequent.

[2] Just 2 options for solving a problem? Only if you are uncreative.
Posted by John at 8:03 AM

Email ThisBlogThis!Share to TwitterShare to FacebookShare to Pinterest
Labels: environment