A Bullet to the Head 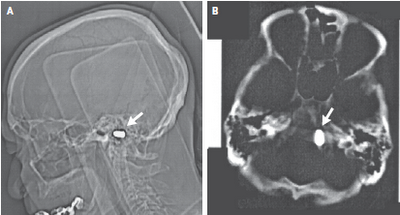 According to the doctors,

"The patient revealed that at the age of 3 he had been accidentally shot with a pistol by his older brother. The bullet had struck him just inferior to the nose, and he had lost consciousness for several hours, recovering completely without specific therapy. In his adult life, he had achieved professional success as an engineer, even winning the Soviet State Prize for his accomplishments."

82 years is a record unlikely to be broken. Isn't it strange that he was shot and that no medical evaluation was even made at that time?

Email ThisBlogThis!Share to TwitterShare to FacebookShare to Pinterest
Labels: health, off topic

Presently when a patient needs care in liquor rehab then which one he will incline toward is a significant inquiry. From the start he needs to see the costing of emergency clinic. On the off chance that his capacity support, at that point he can go for out-quiet assistance. Another case is serious enslavement instance of liquor needs inpatient treatment. Be that as it may, outpatient liquor rehab can likewise be picked for brief treatment.
inspirational quotes for addiction
overcoming addiction quotes