The Real Danger in Polycarbonate (it's not BPA!) and a Solution for it

Polycarbonate (PC) is taking a lot of heat in the popular press these days because of the BPA (bisphenol A) that remains in it as a residual monomer. BPA is an estrogen mimic, but isn't really a concern at the levels found in polycarbonate. Even if all the hysteria about BPA leaching out of PC is true, nobody is suggesting that BPA will kill you. But for PC, that is only half the story.

Polycarbonate is normally made by copolymerizing BPA and phosgene. Phosgene is the real bad guy that needs to be feared with all your being. Phosgene has a long track record of killing people, beginning in World War I when it was used as a chemical weapon, and it's potential use was feared in World War II [*] 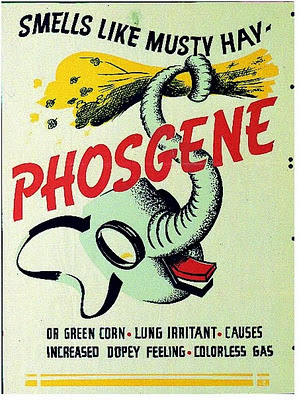 While industrial accidents with phosgene have been relatively rare, they do occur. Some recent examples are a leak that led to the death of a DuPont worker last year in West Virginia, and leaks in Thailand and China that in both cases also had a death, along with hundreds of injuries. BPA never did this to anyone.

But not content to continue living with these problems, that creative bunch of people known as polymer chemists (Ouch! Sorry, I twisted my arm patting myself on the back) have devised phosgene-free routes to prepare PC, typically using diphenylcarbonate (DPC) as a replacement for the phosgene. BPA is still in the picture, but the DPC is a much safer option than phosgene. Shell Chemical has been a large driver in this effort and is building a pilot plant in Singapore to supply this material. The DPC is made in part with carbon monoxide which is nowhere near as toxic as phosgene.

It's also interesting to note that despite the economic downturn and all the people avoiding PC like an elephants avoiding mice, PC production is still growing at 4 - 5% a year.


[*] Phosgene is a great example of something being quite deadly but not having a wretched smell.

unlike stuff like ethylene oxide, phosgene actually has a quite wretched pungent smell, not as foul as other acylchlorides and not irritating one but very characteristic one, that gives a pretty good warning. When working with phosgene one has to keep in mind the insidious and cumulative nature of the poisoning, with symptoms of lung edema delayed by hours after the exposure, so one should not be complacent.

The industrial processes need to be designed in a way that even a catastrophic failure of equipment can release only limited quantities of phosgene.

I've never had to work with the stuff, and even overheated PC, which I have been exposed to, doesn't revert back to it (thank goodness).

'Phosphate-free routes to prepare BPA' should be phosgene-free, right?

Your are absolutely right. I will correct that immediately.

Is PC roof of the gazebo while heated up in summer may release toxic fumes?

So, is Phosgene considered a danger only in the production of PC, or can it be hazardous in the usage of products that still utilize it for production?
Say for instance, I use a product that heats up a tiny metal coil(to evaporate a liquid, to be inhaled) in close proximity to Polycarbonate...
Is that toxic in any way? Can it leach into liquids stored in such a device, over time?
Thank you for your info.