With the passing of North Korea's Supreme Leader Kim Jong Il, I thought that we should review the many contributions that the master of all trades gave to the field of polymer science. After all, anyone who can shoot 38-under par (including 5 aces) in his first time on a golf course, write 6 operas in two years and personally design the Juche Tower 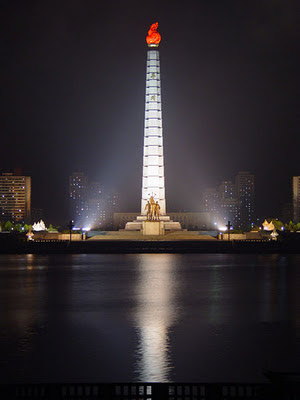 certainly must have made immense contributions to polymer science.

Sure enough, he did. A quick search for with the terms "Kim Jong Il" and "plastics" yields a treasure trove of results, although you first have to get past all the articles about his son having plastic surgery so as to look more like his grandfather. But here's some paydirt - the Supreme Leader in an undated photo touring a plastics factory: 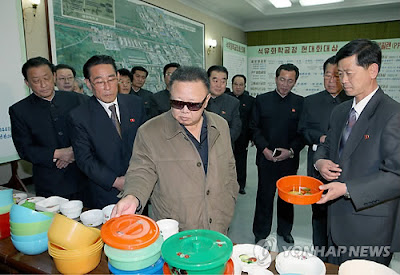 A press release from just a few months ago further elaborates the man's involvement with the Raknang Plastic Goods Factory:

"He set forth the tasks to be implemented by the factory.

An important duty facing the factory is to produce more plastic goods conducive to improving the standard of people's living in reliance on the existing production foundation and bring their quality to the highest level, he said, and went on:

It is necessary to direct great efforts to the technical control and the management of equipment and, at the same time, steadily raise the level of technical skill of the producers.

When making a product, it is essential to produce goods liked by people, products impeccable on any market and having world competitive power and increase their varieties to meet different demands and taste of customers."

Extremely insightful, wouldn't you say? We can all learn from this great man. I am sure as well that he was able to provide pointers for removing mold lines and addressing the blush issues that keep creeping up from time to time (such as increasing the cooling water temperature by 10 degrees).

But was this man limited to just knowledge of injection molding? Of course not - he was skilled in extrusion and fiber spinning too: Back in February, he toured a factory making vinalon, a fabric made from polyvinyl alcohol, 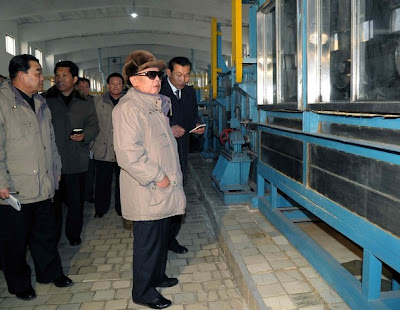 and the press reported:

"He expressed great satisfaction over the fact that the workers of the complex and their helpers have successfully wound up in a short span of time the huge project equivalent to the construction of a large chemical base by their own efforts and with their own technology in hearty response to the intention of the Party to develop the economy their own way and improve the people's standard of living by depending on the nation's economic foundation.

It is an astonishing miracle that the builders have constructed a precious structure of eternal value by their own efforts under so hard conditions by valiantly overcoming bottlenecks and difficulties lying in their way and dedicating their all to the project, he said. He extended high appreciation and thanks to them for having performed the laudable feats for the country and people."

Do you see that? Eternal value! Those of us outside of North Korea build machines that will last for a few decades at most before being discarded, but Kim Jong Il was able to devise machinery that would last forever. Truly this was the Supreme Leader. His only shortcoming was having a human body.