3D Printing has been becoming more and more popular this past year. Plastics Today has declared that the printing of medical organs could be a real breakthrough/growth opportunity for plastics in the near future, but the (semi-)cynical side of me notes that the capturing all that potential will be difficult once the pirates show up. Yes, that scallywag site for sourcing digital media, The Pirate Bay, now has "Physibles", files for preparing physical objects with 3-D printers. This means that it is now possible to duplicate 3-D objects across the planet, the legality of which may be entirely doubtful. There aren't many files at present, but there is somewhat ironically a file for a copy of the Pirate Bay's ship: 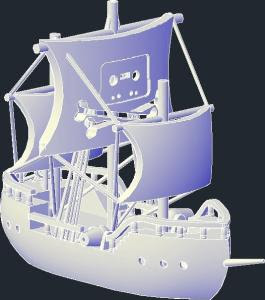 But let's think about what happens when you combine these two stories: How long before someone can make illegal copies of an internal organ? And not just any organ that isn't overly important, but how about say, vocal cords? You want to sing like Adele? Or José Carreras? (And since people are already making 3-D printed versions of a Stradivarius violin, imagine the violin/voice duet that one person could perform!)

How long before we get into heart/lung transplants? Want the VO2 max of Lance Armstrong? And then the ultimate transplant - the brain of Einstein. His brain is preserved at Princeton - how long before someone steals a segment and uploads the relevant information to Pirates's Bay? People will never be able to say about you again "He's no Einstein!".

Clearly all this at present is more fantasy than reality, but if the history of the internet and digital technology has shown us anything, it is that keeping information locked up for more than 10 years, let alone an eternity, is a futile effort. Once your organs are digitized, everybody will have access to them.
Posted by John at 10:02 AM

It is good thing that you have shared on the study of the place. I think that studies like this will be helpful in evaluating about the places and to know about the residential values of the place. Thank you for sharing. Letterhead Printing

Very significant info!Perfect just what I was looking for!. “Success is that old ABC — ability, breaks, and courage.” by Charles Luckman.. depression