Amide Formation - A Case where Polymer Chemists Have it Easy

At the end of last year, Nature had a review article (open access) on amide bond formation. As polymer people, we all know and love amide formation as the basis for polyamides, also known as nylons. Given the apparent ease with which many polyamide bonds can be made (watch the nylon rope trick video), I've never thought about amide formation as being a particularly challenging aspect of organic chemistry. I was wrong. Consider this quote from the article's introduction:

"The current methods for amide formation are remarkably general but at the same time widely regarded as expensive and inelegant. Not surprisingly, in 2007 the American Chemical Society Green Chemistry Institute (comprising members from major pharmaceutical industries worldwide) voted ‘amide formation avoiding poor atom economy [1] reagents’ as the top challenge for organic chemistry. Furthermore, even the best stoichiometric reagents often fail for the synthesis of sterically hindered amides [2]. The issues of waste and expense associated with amide formation are compounded when applied to peptide synthesis, and are responsible for the great cost of commercial therapeutic peptides. The chemical synthesis of proteins is largely prohibited by limitations inherent to traditional amide formation..."

(Footnotes are added by me and are located at the bottom of this article.)

In the nylon rope trick, the diacid is modified to form a diacyl chloride which then reacts with the diamine, in the process forming HCl. Fortunately, most commercial nylons are made from the straight diacid, or more correctly, the nylon copolymers such as nylon 6,6 are made this way. The diacid and the diamine form a isolatable, non-reactive salt which is then reacted at high temperature and pressure to induce polymerization. The nylon homopolymers, such as nylon 6, are made through a ring-opening polymerization of cyclic lactams. Most other organic compounds cannot tolerate the conditions or have an appropriate lactam, and so the search is ongoing for more and better techniques to create amides. Maybe some of these results will spill over into the polymer area, but I have my doubts. Just looking at some of the options 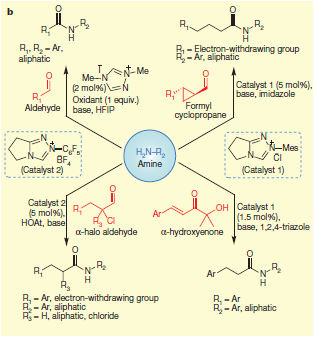 makes me thankful that we don't need to explore them.

[2] All easy reactions fail for sterically hindered products. While polymaleic acid has been made, 2-olefins in general are still considered to be very difficult to polymerize.
Posted by John at 9:21 AM

Because of nylon’s versatility, it is one of the most widely used engineering thermoplastics. Commercially available nylons include nylon 6, nylon 4/6, nylon 6/6, nylon 6/10, nylon 6/12, nylon 11 and nylon 12. The numerical nomenclature for nylon is derived from the number of carbon atoms in the diamine and dibasic acid monomers used to manufacture it. The ratio of carbon atoms is what gives each nylon type its unique property characteristics.

Nylon 6 is a tough, abrasion-resistant material. It has improved surface appearance, creep resistance, and processability compared to nylon 6/6. It also can be molded about 80 degrees F (27 degrees C) lower with less mold shrinkage because it is slightly less crystalline. Adversely, nylon 6 has a lower modulus and absorbs moisture more rapidly than nylon 6/6. Moisture acts as a plasticizer, reducing tensile strength and stiffness and increasing elongation. But, while absorbed moisture reduces many properties, nylon owes part of its toughness to the plasticizing effect of moisture. As moisture content rises, significant increases occur in impact strength and general energy absorbing characteristics. Properly recognized and accounted for, the effect of moisture on the processing and properties of nylon need not be of great concern.

Your work is great and I value you and jumping for some more educational posts. Much obliged to you for sharing incredible data to us. best liquid clenbuterol