A Bad Day in the Operating Room 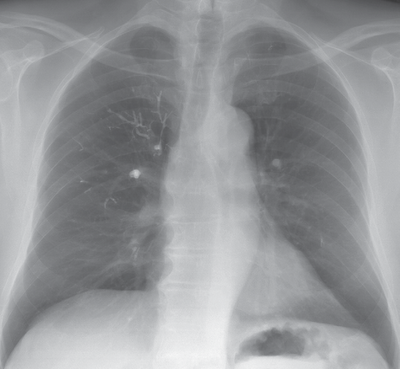 This is an x-ray of a patient's lung. The small white stripes in the upper left are PMMA. How did PMMA get in his lungs you ask? Well, he was having back surgery. Still not obvious to you? O.k., here's the full story as explained by the article in the New England Journal of Medicine. The patient was having back surgery to fix spinal cord compression. The surgery involved injection methyl methacrylate (not polymerized) into the back, whereupon it does polymerize (with a nice little exotherm I might add). The procedure is called vertebroplasty. [*]

As is known to occasionally happen, some the the acrylate got into the bloodstream around the bone and was transported to the lungs. The plastic did interfere with the patient's breathing for a while (low O2 levels in the blood) as well as some mild increases in blood pressure. The doctors that submitted this image to the journal noted that in extreme cases, serious illness and even death can occur as a result of these types of complications.

The Wikipedia article on the procedure has quite a discussion about the effectiveness of the procedure, or more properly, the lack of effectiveness. Combine this with the risks illustrated here and I can certainly state that I would not want this done to me. I like plastics a lot, but only outside of my body, and most certainly not in my lungs.


[*] It's great to have Wikipedia back, isn't it. I missed them yesterday, but their blackout did get me to sign a petition against the SOPA/PIPA bills and contact me representatives in Congress about the issue.
Posted by John at 9:05 AM

My ex told me about a case of a child cancer patient who was to undergo a tumor blood supply embolization procedure on an inoperable tumor. It involved injection of polymer-forming agent directly into the tumor vasculature whereupon it would promptly harden and plug the blood flow to tumor. Except that, the physician who was preforming the procedure did not put the catheter far enough into the correct branch of the artery and the injected stuff got into circulation instead and caused a wide-spread micro-embolisms in brain. End of story for the patient. What happened to the physician I am not sure.

I'd hazard a guess that this doc as a pre-med just squeaked by in his organic labs.