The Dangers of a Flying Cupcake

Or maybe more properly, the dangers of flying with a cupcake - one that is coated with lots of frosting.

The popular media has has a number of reports (1, 2, 3) of how "heavy handed" Transportation Security Agents (TSA) confiscated a women's cupcake as she attempted to pass through security with it. The frosting was considered by the TSA agent as a "gel", a restricted material, and the amount of frosting was judged to be in excess of the amount allowed on a plane in the US.

Although it certainly is fun to take potshots at the TSA and joke about how the agent was hungry and just wanted the cupcake for him or herself [*], rheologically speaking, the TSA was right on this one. Frosting is not a polymeric gel, but more of a "colloidal" gel with plenty of non-Newtonian behavior - certainly yield stress, but also likely shear thinning, and maybe even some thixotropy (I haven't measured the properties myself. If any readers have, feel free to add what you know in the comments box below.) And as the TSA commented regarding the incident, malevolent people are more likely to disguise their means as ordinary object and not give them a distinctive "explosive" appearance: 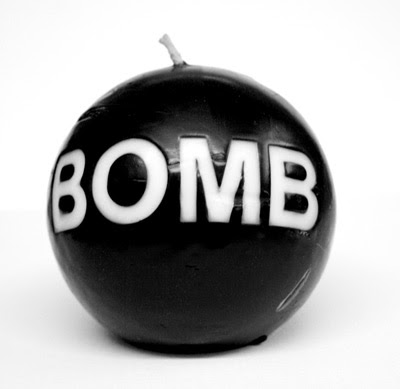 I submit the shoe-bomber and the underwear bomber as examples of potential explosives being disguised as commonplace objects. (Those particular examples didn't work, but that doesn't mean that a smarter/better chemist wouldn't succeed in the future.)

Unfortunately, this incident has come out as yet another example of a sweet innocent person vs. the evil TSA. While in many cases I do agree with that viewpoint, this is one where I clearly agree with the TSA.

[*] I can't imagine any agent eating anything that is confiscated from passengers. Would you really risk your health/life by eating something from an stranger? We're not talking about a box of donuts that's sitting in the breakroom.

A motivated suicidal nut can wear a nitrocellulose-based clothes on the plane, then stuff them into some sturdy sealed container and ignite.

One can skip the weaving part, just nitrate cotton cloth and taylor the garments from it, or even use over-sized T-shirt or thick cotton socks as a starting material. (Celulose fibers shrink and partially sinter upon nitration so the nitrated cloth would be kind of stiff and scratchy to wear but adequate for the purpose).

I was trying to not get into the aspect of whether or not the gel restrictions were a good and effective approach. As you and others have indicated, there are plenty of opportunities to get around them, and there always will be.

I would also nix the cream cheese, mayo sandwiches, PB & J sandwiches and anything else with an obvious yield stress.

Again, I'm not saying that the rule is justified. This is just how I would interpret it.