Words certainly fail to describe the beauty here in these pictures of fluid flow. Ink in water. From Alberto Seveso 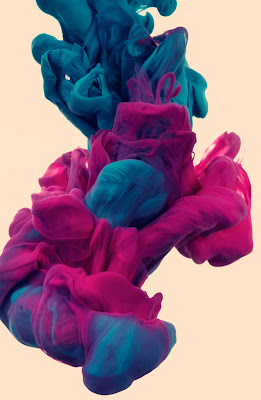 Hi John, I am intrigued as a photographer, the photos you have by Alberto Seveso, I believe you will have more of an idea of perhaps what type of ink or liquids were used? In terms of the densities involved, would you know anything about that?
Regards
Paul

I'm not sure about the chemistries that used, but here's my thoughts: The density of the ink is pretty close to that of water as it doesn't seem like it wants to float. That could be an illusion as we really don't know how the images are oriented or what direction they were taken from (above? below? side?).

I get the feeling that the ink is somehow placed in the water (pushed out a syringe would be my guess) either as a big blob, a long strand or some other shape and then "poked at" with different tools in order to form the flowing shapes, much like the way that a barrista creates patterns in their products. The poking seems to involve some twisting as well. I would guess that the picture is taken from the side opposite of where the poking occurred. Putting a hand/arm in and out of the tank repeatedly would move the water around quite a bit, so I think all the tools are already in the tank nearby and the hand is just offscreen when the shutter is opened (or maybe even cropped out).

We also have no idea about the size of these flows. Because of all the fine details, I think that the ink blobs might be fairly large - 6 inches. If nothing else, that would make it easier for human hands to interact with it.

I would love to know if these comments have any relation to the truth.