Rubber Gloves -They're Not All the Same

Most people (and by that I mean chemists, engineers and other with a technical background) are comfortable with the notion that plastics differ in their abilities to resist attack from solvents and chemicals. Polyethylene for instance, laughs off most acids, but keels over when exposed to hot alkanes and aromatics. Polymethyl methacrylate will sluff off oils, but crumble to alcohols of all sorts. And so.

So why is it then that so many people don't extend this thought pattern to rubber, specifically rubber gloves? Just as different polymers will dissolve in some solvents and not others,

Is that really that surprising?

One of the more maddening issues I've had to deal with in the lab throughout my entire career here as well as at other companies has been rubber glove selection. To paraphrase Henry Ford, "I can have any type I want as long as they are nitrile". Absolutely this is said jokingly, as I can order in whatever gloves I want, but it is something that I have to initiate - the standard stock glove is nitrile and only nitrile. And not to knock nitrile, as it is probably the closest to be a universal glove as their is, but it still has its weaknesses. For instance, here's what happens to a nitrile glove after soaking in toluene (a solvent that I commonly use for cleaning up rubber adhesives) for 5 minutes: 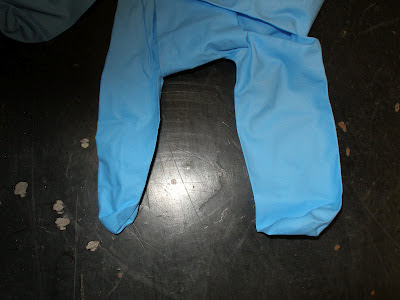 As you can see, the finger on the right is quite swollen compared to the non-exposed finger on the left. What you can't see is how much softer and weaker the swollen finger is.

More than other people at my current employment site, I work with a wide range of chemicals, so that means that that standard nitrile gloves are sometimes the wrong glove. Personally, I have my own stash of different gloves that I draw from as needed and that I keep myself so that others don't blindly raid it thinking that a glove is a glove is a glove.

So how do you know which glove to use for any given situation? Lacking extensive experience in glvoe selection, look at the charts that the glove manufacturers provide. You can certainly go to each manufacturer's webpage, but let me make it easy for you. At the bottom of this page are links to over a dozen glove manufacturer's solvent compatibility charts. How easy is that? Now there is no excuse for not working with the correct gloves. And if you are working with a chemical that isn't on their chart, call them and ask what glove to use. They're your hands, so protect them. No safety officer is going to question you about having the proper gloves. They will see that your hands are covered and think that they've done their job. And now that your hands are protected, do something useful and productive with them, like sending a note to someone telling them that you love them...
Posted by John at 7:49 AM