The Easter weekend is over and I'm still full of thoughts about that lousy review that my latest SBIR grant received. Lousy not because it was rejected, as I know that these are very competitive grants. I'm still ticked about the chemophobia that was on display, but that's already been discussed . What still has me upset are the comments made about safety [*], but I'm beginning to recognize that these comments reflect a larger concern that I've discussed in the recent past.

What I find in the reviewers comments is the common thought that it is only the toxicity of chemicals that makes them dangerous and all other aspects do not.

Look at it this way: Suppose we had only proposed working with flammable solvents instead of isocyanates. I can't imagine that there would have been any comments made from the review about safety concerns, yet we all know that a 4-liter bottle of toluene can easily ignite a large fire that could destroy the building, possibly leading to injuries and deaths among the employees here. Isocyanates can't do that, as they are not that flammable. Would a reviewer ever express safety concerns that we were using toluene? No. So then does that mean we can then ignore flammability?

Or let's dispense with the liquid chemicals entirely and imagine that we were only working with pre-existing polymers such as polyethylene. No one is concerned about the toxicity of a handful of polyethylene pellets, but when you have Gaylords (1100 lb boxes) stacked 4 high, you have a real concern. Why? Because 3-high is the limit. But even that is overly simplistic as the 3-high rule only applies when the containers are in good condition, which means that you trust the operators and fork lift drivers to have good judgement. 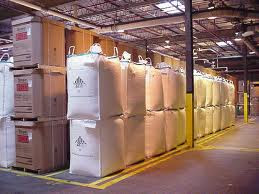 An employee crushed by a falling gaylord is just as dead as one that sucked in a toxic amount of cyanide gas. But would any reviewer would ever express concerns along those lines of making sure that we stacked gaylords correctly? Why not?

Chemical safety is multifaceted. You cannot just focus on toxicity. You cannot just focus on flammability. You have to look at all aspects of a material and be concerned about all the potential hazards which in many cases, particularly on an industrial scale, can be physical. As such, the reviewer has entirely misplaced concerns about our proposal.

A few weeks back, I was upset about the question that was proposed on the Safety Zone blog: "What is the most dangerous chemical you've handled?". That question reinforces this notion that acute toxicity is the only aspect of danger associated with chemicals. The review of our grant showed the pervasiveness of that attitude. As scientists and engineers, we can and should know better.

This is more than just a concern for technical people however, for if we can't look at and intelligently discuss the multifaceted nature of safety, can we really expect the general public to be any better? Can we really be disappointed in them when they express irrational fear of minute aspects of a certain chemicals and completely overlook more common dangers? We need to do better before we can expect better from the public.

[*] I proposed working with isocynates to created some novel polyurethanes, a material that we as a company work with on both a lab and production scale. One reviewer was greatly concerned about their toxicity and that "no safety precautions are mention [sic]"
Posted by John at 9:06 AM

Email ThisBlogThis!Share to TwitterShare to FacebookShare to Pinterest
Labels: safety