When you leave the Twin Cities of Minneapolis and St. Paul start heading north and west, you end up in some beautiful areas of woods and lakes, but also an area where very strange things have been known to happen. This is after all, the region where the movie "Fargo" and its infamous woodchipper scene occurred. This last week however, something that might well have occurred in a B-grade science-fiction thriller happened in the small town of Dent, Minnesota. It was an invasion of alien slime! 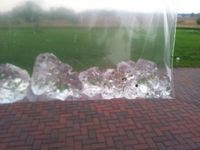 The local newspaper described it as:

I can just imagine the scene on that fateful morning. "Dear?! There's something slimy on the front porch." "Why don't you touch it and see?" "I'm not going to touch it, you touch it." "That settles it, I'm calling 911. And the newspaper."

From the photo, you can see that the slime has been successfully captured, although probably with significant loss of life and injury to innocent civilians. The newspaper got a local chemistry professor to look at it: "I would say looking at it and feeling it [Editors note: you mean he touched it? Eeww!], it probably is just a water retention gel of some sort. A silicone polymer … maybe." I agree that it is a water-retention gel, but those are usually crosslinked polyacrylamide. The gels are definitely not a hydrophobic material like a silicone. The gels swell a tremendous amount when wet and do have a nice glistening appearance of an alien slime monster.

In closing, remember too however, that the city of Dent is very close to the lost county of Mist in which Lake Wobegon is located, so while it may well have been a quite week in Lake Wobegon, the City of Dent was invaded by aliens. And they're coming for you next.

Email ThisBlogThis!Share to TwitterShare to FacebookShare to Pinterest
Labels: polyacrylamide

I thought I remembered this, and I was right!

Somebody needs to tell this guy about #RealTimeChem !