Did anyone else notice that the New York Times yesterday attempted to overcome the Second Law of Thermodynamics? 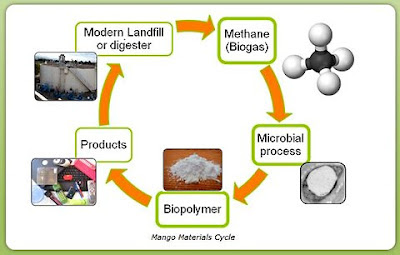 That's right, they claimed that a new process could repeat the cycle illustrated here on the right WITHOUT WASTE!. Starting with methane, microbes would ferment it and produce the biodegradable polymer polyhydroxybutyrate (PHB), which could then be used as desired. After being used, the product would then be thrown into a digester which would then generate methane, that methane then being used to start the cycle all over again.

No waste, huh? Oh please!There is waste in every single step of that cycle. That it's not shown in the diagram doesn't mean it's not there. At the very least, the steps involved in forming the PHB into a usable product will require lots of energy to melt and pump it. If you've stood over a hot extruder that is melting and processing plastics, then you know there is a lot a waste heat given off.

But let's ignore all that and just focus on the mass balance in this cycle. Taking methane as the initial feed, it has the chemical formula CH4. The repeat unit in PHB (shown below) is C4H6O2. Right away, this doesn't look good. Not only is the C/H ratio off (it went from 1:4 to 2:3), but there is suddenly oxygen that wants to be in the mix. That means for every molecule of methane, 10 atoms of hydrogen have to be disposed of (hint: WASTE!) and 2 atoms of oxygen need to be called in from somewhere. I've limited knowledge of the biochemistry here, so it is possible that some of this hydrogen will be taken up by the microbes and used elsewhere, but the microbes also produce waste products of their own. I'll talk more about this again in a minute.

PHB exists in microbes as a source of stored energy. People store their excess calories as fat, microbes store it as PHB. But regardless of how it is stored, it is kept inside the cells which means you have to get it out of the little critters. And being a polymer, you can't just get it to diffuse out. Instead, you have to go in there and rip it out. Line up the bugler to play Taps, because it's the end of the line for the bugs. They lived a short happy life serving us well to make plastic. And while we are happy to get the plastic, you have all these dead microbe parts that you need to dispose of, and that is waste. Material waste. Material waste that isn't shown on the chart above, but still exists. Depending on the exact situation, the amount of PHB in a microbe can be as high as 75% (on a dry basis - meaning the water is recovered and reused), so that there is at least a 25% mass loss in this step.

Once you have the PHB, there is still more waste to come. While polymer processes that run continuously can be very efficient with material throughput, startups and shutdowns will lead to loss of material, although this is usually just a few percent or less. Consumer use of the products will also lead to some further waste as not all of it will end up being collected for the final digestion. Despite the ubiquity of recycling bins for aluminum cans, the national rate in the US is only 65% - we can't expect PHB to do any better, so that means are least a 35% loss of material.

Finally, in the digestion stage, the mass balance that was run above now needs to be reversed. To convert the PHB back to methane, the two atoms of oxygen need to disappear (WASTE) and 10 atoms of hydrogen need to be called in from somewhere.

So here is the bottom line on the waste:
As you can see, the chart above has a number of missing inputs and output and therefor does not represent a mass balance. But more importantly, the question I have is this: why would you want to create a processing loop such as this? Once the PHB is made, keep it as a plastic and reprocess it. A tremendous amount of energy and matter has been used to make it and that should be respected. Degradation of polymers, particularly if it only to then serve as a feedstock for recreating that polymer anew is terribly inefficient, even if the concept flows well as a visual.

"Without waste"? Hardly. The New York Times should be better than this. Could you talk to a engineer or a chemist next time before you hype something, please?

It must be noted that it was the New York Times that proposed the waste-free title. Mango Materials makes no such claim on their website. Good for them.

Finally, many companies over the years have attempted to make PHB and other polyhydroxy alkanoates using a variety of microbes. The efforts have been only mildly successful. It is not a trivial task and I wish Mango Materials the best of luck in their efforts.

Email ThisBlogThis!Share to TwitterShare to FacebookShare to Pinterest
Labels: biopolymers

I think they typically come in regular plastic use.
Ldpe With Pa Rolls Scrap From USA


The most reliable printers provide an easy printing option for all your photos, documents and other hardcopies. However, it's difficult to select the ideal one. If you're looking for basic document printing to complete homework assignments, premium photography printing that allows for frames or one that supports scanning, copying, and even the faxing process there's a printer available that can meet your needs. Are you looking for an all-in-1 inkjet printer or a laser printer with black-and-white? We'll assist you in deciding the type of printer you'd like and then determine which printer best matches your needs https://printerhive.com/.

Using a tripod for your vlog is one of the best things you can do to improve its production value. However, picking out your first vlog tripod can be a daunting endeavor. We've listed our favorite tripods below, which should help you find one that fits the unique needs of your vlog. https://wopick.org/best-vlogging-tripod.html

I’ve worked with printers a lot, in the office setting, and now at home. I’ve learned a thing or two along the way, which I’m going to share with. We’re going to take a closer look at what makes a good printer so you can pick the Best Printer for Homeschool.

Do you wish to have a modified version of your current WhatsApp? https://mygbapps.com/whatsapp-delta-apk/

Adrian Griffith, ICC Senior Manager Umpires and Referees, said: “We are delighted to be able to call on some of the world’s top officials for the ICC Men’s T20 World Cup with a group of 16 umpires and four match referees.

Your website needs servers to make it available online. Your web host provides and maintains reliable servers that ensure your visitors have constant access to your site. They’ll also act as your domain registrar and register your domain name and IP address with ICANN.using apachis Get Free Domain with any web hosting plans also free SSL Included.

If you do want to make fries, consistency is key. To get each piece exactly the same width, you either need to be an expert with the knife or get a mandoline. You’ll also keep your fingers safer while you get those perfectly even slices.Some slicers don’t quite make the cut though, so read on to see the best mandoline slicers available to tackle sweet potatoes and learn a few tricks to make it as easy as possible to cut up your sweet spuds here.

Furthermore, this isn't only sections of land of simple to-develop white pine. We plant an assortment of animal groups, in addition to those industrial coffee table utilized in our furnishings, so they develop one next to the other as they do in nature. By blending the species as we plant, we guarantee that a curse won't influence a whole backwoods.