3D-printing - the controlled deposition of tiny blobs of plastic which can be built up to form 3D-objects - continues to grow at a nice clip. This is not only as because of falling prices for the printers, but also because of the creativity that people are showing in what they can and do make. I've talked in the past of an extreme example - medical organs - but that is still a ways off. In the mean time, we'll have to be happy with jewelry, artwork, and other common items.

But now there is news that someone has attempted to make an all-plastic gun with a 3-D printer. In this case, they didn't succeed as they were leasing the printer and as soon as the leasing company found out about it, they immediately took back their printer and ended the lease.

The concerns here are rather obvious: that someone could make and then own a gun without any permits and background checks, meaning that felons could easily acquire them. Such a gun could also not be detected by a metal detector (although the ammunition would), meaning that the gun could be brought through security in airports, courthouses and other building with security concerns.

And while these are legitimate concerns, a plastic gun is much less of a concern than a metal one. A gun made of plastic such as this would obviously only be good for one shot, and I would question if that would even work very well. Unless the gun is heavily reinforced in the back of the barrel, I would think there is a good chance that some part of it could come flying back at the shooter. 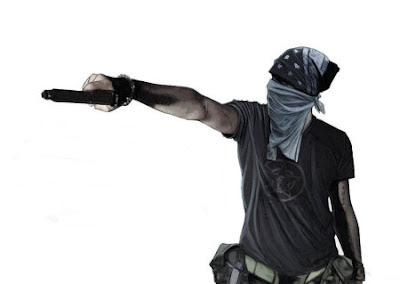 This would then mean that some gangster punk not only be holding the gun sideways (a great way to reduce the accuracy of the aim), but also to the side in order to avoid the exploding parts (leading to a further reduction in the aim accuracy). In short, such a gun would pretty much require that it be shot a point-blank range or even direct contact. And thinking about it further, if there is any recoil from the gun, that would then be stressing the shooters wrist and arm at a very bad angle leading to a sprained wrist at the very least. I think someone may think it's cool to shoot a polymer gun once, but they would think long and hard about shooting another one.
Posted by John at 10:41 AM

there is a few proof that more regulations can reduce gun violence, but some other latest shooting highlighted somebarriers of law. British Member of Parliament Jo Cox became murdered with a “makeshift gun” despite the United Kingdom’s restrictive gun-control laws. postcards printing

I’m honored to obtain a call from a friend as he identified the important tips shared on your site. Browsing your blog post is a real excellent experience. Many thanks for taking into consideration readers at all like me, and I wish you the best of achievements as being a professional domain. esigns custom vinyl banners

Hello there, just became alert to your blog through Google, and found that it’s really informative. I’m going to watch out for brussels. I will be grateful if you continue this in future. A lot of people will be benefited from your writing. Cheers! esigns banners

This is such a great resource that you are providing and you give it away for free. I love seeing blog that understand the value of providing a quality resource for free. http://globalasiaprintings.com/

This is a brilliant blog! I'm very happy with the comments!.. 24 hour printing

Regarding all aspects the blog was perfectly nice.
source

Thanks for taking the time to discuss this, I feel strongly about it and love learning more on this topic. If possible, as you gain expertise, would you mind updating your blog with more information? It is extremely helpful for me. Letter Printing

This is just the information I am finding everywhere. Thanks for your blog, I just subscribe your blog. This is a nice blog.. Print In London

Wouldn’t it be cool to be capable to stitch out a picture of a cherished one the usage of an embroidery machine? two Guess what?? two You virtually can. Using less expensive and even free software, it is indeed viable to convert an photo to an embroidery file. two So – get out your iPhones and snap some pics, because I’m going to exhibit you precisely how to do it. But truthful warning: convert jpg to embroidery file free is not exactly like pressing an effortless button. There is a little bit to it and some images will be simpler to convert into an embroidery file than others.