Rheology of a Bacterial Culture

The Physics Arxiv has a new preprint which I find...interesting. It's pretty simple to describe the setup - the researchers simply put a actively growing bacterial culture in an standard dynamic mechanical analyzer and looked at what happened over time as the colony multiplied via division [*]. I say that this is "interesting" because while the rheology details aren't quite right, the overall results are still pretty fascinating. Here's the primary finding: 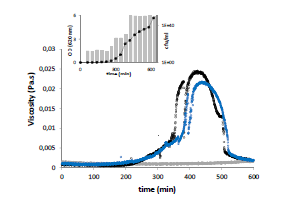 with the blue/black curves showing how the viscosity rises and falls over time in a steady-state shear condition. It's a pretty dramatic climb and fall, but if you look at the magnitudes of the viscosities, you can still see that these are pretty thin liquids (water has a viscosity of about 0.001 Pa s). The inset shows how the optical density (shown by the dots) and the number of colony forming units (CFUs) (shown by the bars) changed over time. Obviously there is something more going on here than just say that the viscosity is proportional to the number of bacteria.

The researchers had expected such non-linear results as they were working with Staphylococcus aureus, a microbe known to produce adhesins (yes, adhesins, not adhesions). These are proteins on their cell walls that allow them to adhere to surfaces and each other. Adhesin production is greatest when the growth of the CFU's is the greatest. After the cell density is high enough that a more-or-less continuous network of cells is formed, the adhesin production then drops off (I suspect that this is to allow cells to move off and infect new areas, much like when cancer cell metastasizes).

The researchers are proposing that it is largely the adhesin production cycle that is being shown in the rheological data. During the initial production stages, the viscosity rises are the cells stick to each other and the rheometer's plates. Later, once the adhesin production falls, the shear in the rheometer is able to break apart the cell-cell and cell-wall interactions and destroy the network. Getting both shear-thickening and shear-thinning behavior from a single sample is pretty difficult with the inert materials that a rheologist commonly faces, but for biological samples, it's all in a day's work.

[*] More proof that microbiologists are bad at math - they think multiplication and division are one and the same.
Posted by John at 10:24 AM

Intresting! but how this viscosity and growth curve correlation help to find out some thing useful? I mean in terms of application? what could be the out come of this research?

Interesting! OD vs viscosity graph of actively microbial population. But why researchers come across this work? what could be the application for this simple setup and correlations happened between OD, viscosity and cfu/ml?

gia ve may bay di my

Given the wonderful fee of new kitchen and loo cabinets, it's no surprise that householders often flip to paint as a cost-effective choice way of changing the look of their cabinets. Not only that, painting offers you whole freedom to workout your innovative potential. No longer are you certain by means of a set quantity of cabinet finishes. Choosing popular interior acrylic-latex for your cupboards might also appear like a correct notion at first, however you will discover that it lays down in streaks and easily peels affordable kitchen cabinets paints.