When people hear of the Great Garbage Patch(es), the mental image they have is something like this: 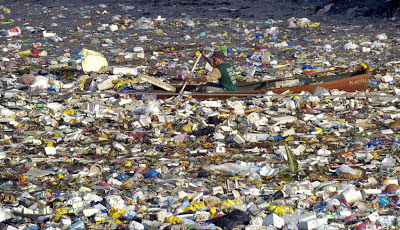 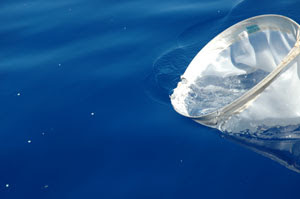 I've mentioned before the words of Andrew Blackwell that the afflicted area of the ocean is more of a garbage galaxy than anything else - mostly empty space. This is a sadly ironic situation in that a very concentrated patch would be easy to capture and remove, while the reality is that the concentration of garbage is so low that removing it from the ocean economically is far beyond our present technology.

But even with this reality, some people fantasize in the other direction about the garbage patch being something so big, so grandiose that ... well, it's best if I let the pictures speak for themselves: Wow. Wow. Wow. What a pile of garbage. Literally and figuratively. This is the first monthly installment in an ongoing series.

"Created by Joe Harris and Martín Morazzo, the book follows the young heir to an oil fortune who seeks to cut his own path by conquering the monstrous gyre, which in Great Pacific is represented as an actual island of refuse twice the size of Texas, and founding his own sovereign nation. Unfortunately for him, what awaits the ambitious young billionaire on the Great Pacific Garbage Patch is much more dangerous than just trash."

If the gyres were anything like that, you would be able to see it from satellite pictures and Google Maps, like in this drawing:

and yet, as (the Scripps Institute notes), nothing of the patches can be seen from the air or space.

Sadly, others have had even more ludicrous thoughts of the garbage being used as living space. Not for a conquering hero is in the graphic novel, but as an actual community complete with high rises, a modern day Venice: 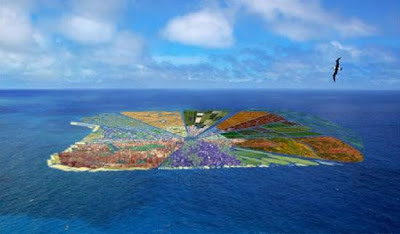 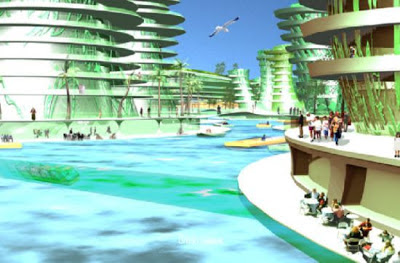 Looks lovely, doesn't it. Until the first tropical storm or typhoon comes along.
Posted by John at 11:11 AM

The last picture would have been a good idea though. Imagine, signing up the best real estate developers, architects and engineers to develop a 'floating city' based solely on garbage. I think it has a lot of potential.

I say, good luck with that. It's going to be quite a challenge, considering you have to bring in a lot of specialized heavy equipment, you have to stabilize the construction site, check what materials are appropriate for the job, among other things.

Your search is over when choosing dumpster rentals.rent dumpster charleston

This blog post is really great; the standard stuff of the post is genuinely amazing.
rent container charleston

We are truly thankful for your blog entry. You will discover a great deal of methodologies in the wake of going to your post. I was precisely scanning for. A debt of gratitude is in order for such post and please keep it up.

I'd be trampled if all sites gave articles like these awesome articles.
top graphic design firms in the us

Great and really accommodating for all the people available and I ought to additionally propose them because it has helped me masses and I am sure that it'll do the same for you!
San Francisco web design firms

The team is perceptive of the bigger picture while being able to implement granular action items.
agency web design

That’s a nice site you people are carrying out there.
best brand design