A Rare Treat for a Chemist/Engineer

My recent trip to the underworld exposed me to a wide range of temperature swings. Above ground over the course of the week, the temperatures ranged between 57oF (14 oC) and 0oF (-16 oC) with -40 windchills (that being well known as the only temperature where oF = oC) and some freezing rain in between. And then the mines were a damp 55 oF. Combine all of this with half a dozen flights on Bombardier CRJ200's (which in most cases meant taking a hike on the tarmac) and I was not surprised at all that I came down with a nasty headcold this week. Writing this blog? No interest at all when my head was in the clouds. Somewhat ironic eh, given all the cloud computing we do these days...

While victory over the rhinovirus has yet to be fully achieved, interest in blogging has self-evidently been recovered.

Another exciting benefit of my new job is...well let me show you some pictures and you should be able to figure it out. This is my new lab bench: 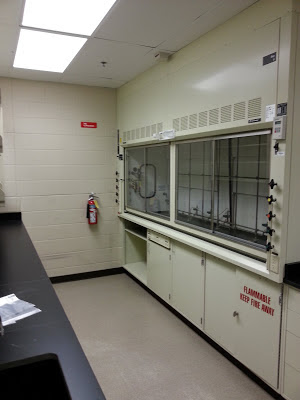 Pretty clean, huh? Well, here's the next bench over: 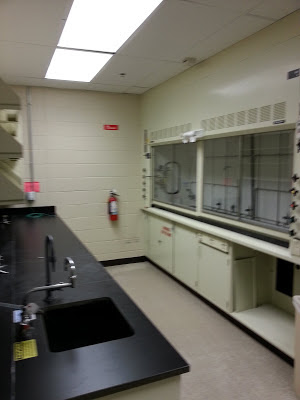 Also clean enough to eat off of. Or how about this shot: 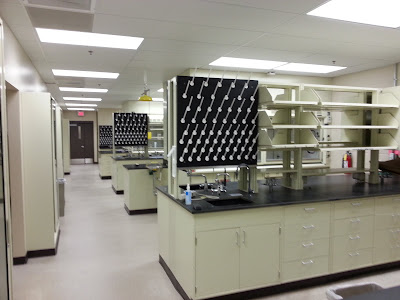 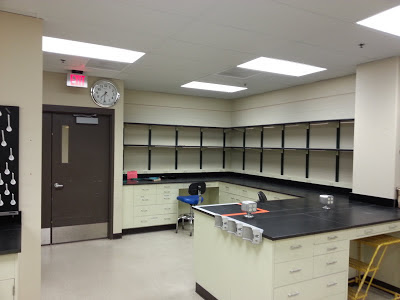 As you can see, it's a brand NEW lab. Nothing is in here. No balances, no beakers, no nothing. And so me and my labmates get to stock the entire lab. This is something I've never had to do before, and something that I doubt most chemists and engineers ever get to do. Start from scratch with not even a single piece of weighing paper. We are stocking it with the basics as fast as we can and hope to get down to some actual chemistry in another week or so.

One of my labmates has already ordered started ordering chemicals for his project. I haven't yet asked what he ordered that required this trifecta of hazard labels: 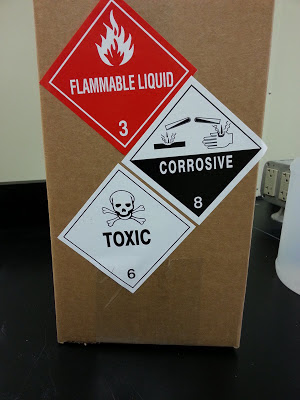 I can think of things that would match any 2 out of the three labels, but not all three. Maybe I won't ask.

I'll try and post pictures again of the lab in a few months. When I was still in school, we used to say it wasn't a party until a beer was spilled, so I'm thinking the chemistry equivalent would be that the lab isn't broken in until a) there's been a fire, b) a liter or more of solvent was spilled, or c) someone created something so rank and foul smelling that everyone left the lab for the afternoon.

I got to help stock a pair of labs nearly from scratch when a school I taught at got to move into a building of its own (rather than renting space from the local YMCA). There were a few things owned for earth science & biology (along with MS science), but nothing for high school chemistry or physics.

The only other time I've spent 5 figures of money that quickly was buying a car and a house.