Viscoelasticity in the Bathroom

This is an exciting post for me as it features my directorial debut in the video world. You decide: move to Hollywood, or don't quite the day job?

Before we get to the reel, here's some background on the film. As I've mentioned on many occasions, the bathroom is full of non-Newtonian materials. Bingham fluids - materials that don't flow until a large enough stress is applied - tend to dominate. Toothpaste is the most visible example. And then there's the classic Bristol Scale for describing the flow characteristics of human faeces. But new examples of viscoelasticity can show up in unexpected places as you shall see.

This post is about a new toilet seat lid that I recently installed in my home. The old one was loose and tightening the bolts was just not working out. Besides, it was a heavy wood one that let out quite a boom when it fell. After a trip to the local big box, my wife and I decided to try a seat that is viscously damped - it will fall slowly after just a small tap to start it on its way.

Changing a toilet seat may seem like a 5-minute job, but I assure you it is anything but. You have steel screws that are in a damp location (i.e, exceddingly rusted) and pretty much impossible to access without a very deep socket - assuming that the nuts are even of a normal shape. Mine were coated with plastic with some odd C4 symmetric pattern obviously designed to be turned by fingers. I'm sure they were easy to install way back when, but there was no way they were moving anymore.

If you look at Google results beyond the first 20 or so sites that tell you how easy it is to change a toilet seat (and in principle it is) you get to all the discussion sites filled with people having the same problem - the husband thinks it's a 5 - 10 minute job and it is anything but. The best approaches seem to be to hit the bolts from above. There is a YouTube clip out there where a guy takes a grinder to the bolt heads and is done in about 10 seconds, albeit he will be spending a couple of hours repainting the ways. The much milder approach is to use a hacksaw, or in most cases, just the blade since you are trying to cut parallel to the toilet. I took that approach and in 45 minutes, voila! I had this: 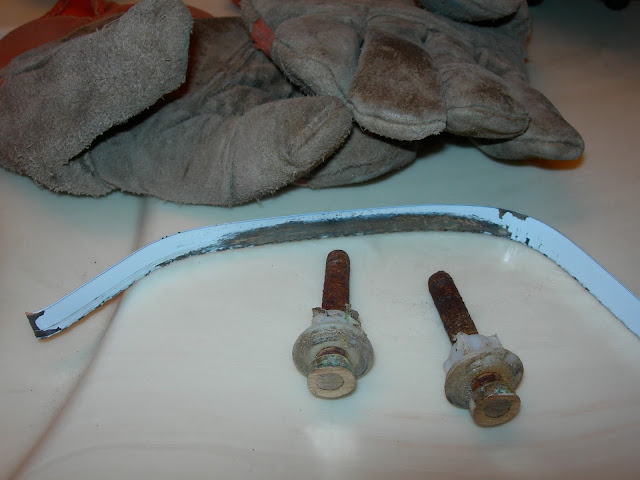 A thoroughly destroyed hacksaw blade and two cut bolts. (Note the leather gloves - PPE is just as important at home as in the lab). Putting in the new seat was easy, although I was not happy to see that the seat had steel bolts. But most likely some other poor guy will have to deal with that in 20 years...

Anyway, the seat is great (more on that in a minute). But the rheologist in me had to play with it and quickly found out something else about the seat:It's viscoelastic, not just viscous. That's not unexpected as all fluids - even water can show viscoelasticity. Something this viscous will usually show elasticity as well that can be detected with the naked eye. I'm already thinking about how to quantify some characteristics of the material sometime soon (my wife thinks I'm nuts...)

One last comment: I mentioned that the toilet seats work great. Too great. In fact, they can be counterproductive. I've ending up slamming the other seats in the house when I absentmindedly forget which toilet has which seat. So instead of there being less slamming, there is now more slamming. Be warned: change none of the seats in your house or all of them. There is no happy medium.
Posted by John at 10:18 AM