The advancement of theory and experiment seldom proceeds at the same rate. Sometimes experiments results exceed the ability of theory to explain them, and at other times, theory provides results that can't be duplicated in the lab. A good example of this is a new paper in Physical Review Letters ($, but there is an open access summary). Using computer simulations, the researchers looked at what would happen if superhydrophobic spheres could be located at the interface between two liquids. Here's a visual: 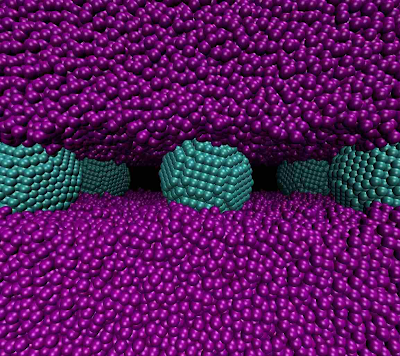 As might be expected, the fluids not only didn't mixed, but flowed past each other quite nicely too. For those with fluid mechanics experience, the surface not only violated the "no-slip boundary condition", but also showed some of the highest slip lengths ever observed (or is calculated a better term?). This setup reminds me of dry water, where water droplets are encapulated by silica spheres. The over composition is 95% water, but it still flows like a dry powder.

As I said above, this is all good in theory, but putting this into practice is going to be rather difficult.

"[Author] Pierre-Louis is hopeful that experimentalists will soon check these predictions. A big challenge, already a problem for the patterned solid surfaces, is that pressure against the interface can vary widely, depending on the local flow speed of the fluid. 'Pressure is the biggest enemy for slip,' he says. It increases the penetration of the beads into the liquids, spoiling the reduced friction, and can eventually cause the air gap to collapse entirely."

So how could this be experimentally replicated? Gases can have greatly reduced pressures, but generally lack the cohesive strength of liquids. This is especially true for ideal gases, so non-ideal gases might be an option. Strongly non-ideal. So non-ideal that they are almost liquids. Which then brings me to this line of thought, which is admittedly half crazy: use supercritical fluids instead of liquids. The density of the fluids could be allowed to vary greatly, thereby reducing the pressure on the beads. The only downfall of course, is that any supercritical fluid that I know of is already at superatmospheric pressures, which defeats the whole purpose of this. (I told you it was a half-crazy idea).

Those are my thoughts at this point in time. Anyone else want to chime in?