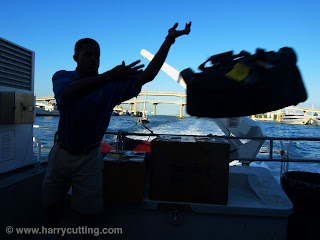 In the world of organic chemistry, polymer chemists running polymerizations are like the baggage handlers on your last flight– we shove all the monomers in there with little regards for how they arrange themselves during the polymerization. For instance, if I were to copolymerize acrylic acid (monomer A) and butyl acrylate (monomer B), I would end up with a statistical copolymer, meaning that the odds of an A being next to a B and not another A is statistically determined. Those statistics are a function of the amount of A and B in the reactor, the temperature, the solvents (if any), etc. [1] I can do a little better with making a polyamide for instance, since it’s not free radical chemistry, but only if I have just 1 diamine and 1 diacid. If I introduce a third or fourth monomer, then it’s back to the statistics. It’s a mess and we just can’t control it. Toss the luggage in and as long as it stays in the plane and gets to Wichita Falls, everything is fine. Toss the comonomers in the flask and as long as they don’t exotherm out of the reactor, everything is fine.

Compare this to the people doing multistep organic syntheses – they are the watchmakers exerting precise control over how all the pieces fit together and in which order they are installed. Polymer chemists will complain that the size of the monomers is so small that they can’t be handled with that degree of precision, but the irony is that final product of many polymeric materials is wholly macroscopic (something discussed here in the past).

Things are slowly getting better with each passing year decade [2], but we still have a long ways to go before we can exert anything like the control that cells have in synthesizing proteins from 20 different comonomers. While we can’t duplicate that, the fact that it can be done can still inspire us to do better.

A number of people have attempted using the existing DNA replication methods provided by cells to produce polymers, and they have had success – as long as the monomers are pretty close to being DNA bases themselves. Look at this row of monomers and tell me how many people want polymers of them:

Those phosphate groups will wilt at the first sign of some serious heat.

But there now a new hope that can being to bring polymer chemistry in line with the detailed synthesis of a drug designer. Nature Chemistry (pay-per-view) has a recent article from the Liu group at Harvard that shows that using DNA can aid in the synthesis of polymers of that are completely distinct from DNA. As you will see, there are a lot of steps involved (the Supplementary Information is 86 pages! Glad I wasn’t reviewing this one!), but I find the overall procedure clever enough that it’s worth thinking about further. Below is a simple picture of what each monomer looks like (I redrew the picture from the article as I thought the pictures in the article were pretty confusing until I figured out what was going on). Each monomer is a ring that has 6 parts to it. 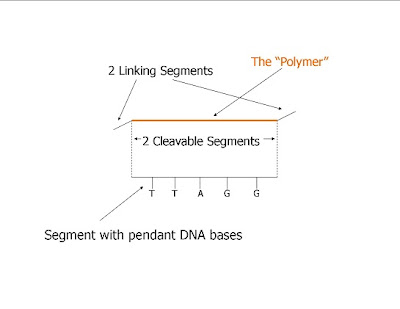 There is a segment with 5 DNA bases attached, 2 cleavable segments, 2 linking sections and the polymer segment of interest. (Making those monomers themselves would be a large chore.) Each monomer has a different DNA sequence on it. The DNA segments mate with corresponding DNA segments on a substrate (according to the usual A-T and C-G mating rules). Once the mating is done, all the monomers are geometrically close to each other in the desired sequence and orientation. The linking sections are then linked to create a ladder polymer. This is also why the monomers start as rings – it helps to keep the linking sections close to each other. Finally, the cleavable sections are cut, leaving you with a polymer of desired composition detached from the substrate.

Obviously not all polymers can be prepared in this manner. You’re stuck with those possibly undesirable linking segments, the monomers have to be largely water-soluble and be able to withstand the linking and cleaving reactions, but still, this is a big breakthrough in that the resulting polymer doesn’t look like DNA at all. It’s a very clever use of geometry and sequential reactions that ultimately produces a unique product. And it’s quite a bit different from the approach used by luggage handlers. Remember that next time you’re in Tampa and your clothes are in Cheyenne.


[1] With free radical polymerizations, the emphasis is on the free and the radical is never too far away.

[2] I just don’t think I will live long enough to see the control that I can dream of. Progress is woefully slow in this field. And what am I doing to speed it along, you ask? Nothing. Absolutely nothing. So no, don't think that I am be overly critical. This is a very challenging problem and I know it.

Email ThisBlogThis!Share to TwitterShare to FacebookShare to Pinterest
Labels: polymerization

I've made a link here http://www.setificio.com/blog/perch%C3%A9-non-produciamo-seta-sintetica, "Why don't we produce synthetic silk?". It's on the page of the technical high school for silk technology, Como, Italy. The post closes inviting our students to give a look at Rheo Thing, at least because often I'm taking some teaching material from it ;)