Flouropolymers! How Do I Love Thee? Let Me Count the Ways

This past Monday, the Minnesota Vikings [1] announced [2] the continuation of their long-term obsession with fluorine polymers. This love affair first started over 30 years ago when the Hubert H. Humphrey Metrodome (aka, the world's largest Kaiser Roll) was built and the team started playing their home games there. The roof is made up of polyethylene fabric that is held up by the higher air pressure in the building except for those couple of times when the weight from heavy snowstorms collapsed the roof.

Through the kind generosity of the People of Minnesota, we are building the Vikings a new stadium so that the billionaire owner can become even richer than he currently is (it is apparent to one and all that he needs the money more than we do in this difficult economy). 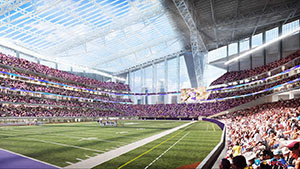 The new design was revealed on Tuesday (as shown), and lo-and-behold! the new stadium has a solid roof. No more Teflon held up by the ideal gas law. No, the new structure has a solid roof held up by the much more desirable van der Waals interactions. But wait, I said the love affair with fluorine polymers continues and it does. What appears to be glass in the new building is actually ETFE, a copolymer of ethylene and tetrafluorethylene.

The Vikings previously had a 30-year lease in the Metrodome, and will have a 50-year lease in this new building, thus cementing an 80-year relationship with fluoropolymers. So I think today's post can be summed up graphically as:

[1] For the international readers, the Vikings are the local football team. American football. You know, the sport where the foot contacts the ball less than a dozen times in a typical 1-hour game that takes over 3 hours to play.

[2] I thought it was rather odd that the announcement was made at the Guthrie Theater, a world-renowned playhouse. For most football fans, it was probably the first and last time they would set foot in that place.
Posted by John at 8:49 AM

I admire this article for the well-researched content and excellent wording. I got so involved in this material that I couldn’t stop reading. I am impressed with your work and skill. Thank you so much. https://heatonbrosroof.com/