The Final Settlement on the Dow/Kuwaiti Joint Venture 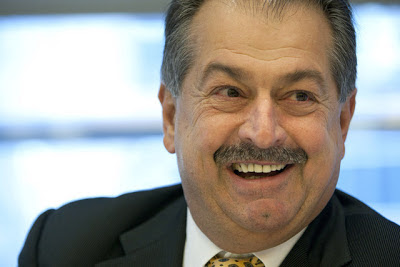 Dow Chemical finally received their $2+ billion dollar settlement yesterday, and this photo of Dow CEO, even if not taken right after the check cleared, still must capture the feeling. I first starting writing about this back in Jauary of 2009; you can read all the posts 1, 2, 3, 4, 5, and 6 if you want or here is the TL;DR version:

Dow and the Kuwaiti run Petrochemicals Industry Company (PIC) decided to form a joint venture. PIC was to give Dow some money for the assets Dow was providing, but PIC pulled back from the deal since the price of petroleum was falling and they needed the oil revenue for the deal. Unfortunately, Dow had already planned on using that money to buy Rohm and Haas, so things got hotter than the Kuwait desert at noon on the Solstice. The lawyers got involved, Dow prevailed and finally, after nearly a years delay, got paid.

I'm glad it all worked out in the end. And since "Kuwait Petroleum won’t take “retaliatory or punitive actions” against Dow as a result of the payment", this should be the final, final word.