The Glass Transition of Teflon

It's a simple enough question raised by a new research article (European Polymer Journal ($)): "What is the glass transition temperature of PTFE"?, but like so many measurements of PTFE, the answer always starts with "it's complicated".

Even after 24 years in the polymer industry, the complexity of PTFE (polytetrafluorethylene) but better known as Teflon [1] still baffles me. It's not as if the underlying molecular structure is complicated. It is simply a perfluorinated analog of polyethylene, and polyethylene is about as well behaved as any polymer out there. But with PTFE, the material that is prone to incredibly simple questions with extremely difficult answers. Try these for starters: At what temperature does it melt? [2] If nothing sticks to Teflon, how does Teflon stick to the fry pan? [3].

Given all that, plus making measurements of the glass transition, which by itself is already a heated subject, the title are guarantees you a head-scratcher. You may come up with an answer, but it will be quickly followed by "it's complicated".

Being a very simple macromolecule, PTFE crystallizes, so it may seem odd that PTFE shows a glass transition at all, as the transition is normally associated with amorphous materials. However, as is the case with all crystalline polymers, any given non-microscopic sample is only semi-crystalline. Because of the chain lengths and entanglements that arise from them, it is impossible for the polymer to completely crystallize. As a result, there is a significant amount of amorphous material trapped in the sample and this material is what exhibits the glass transition. 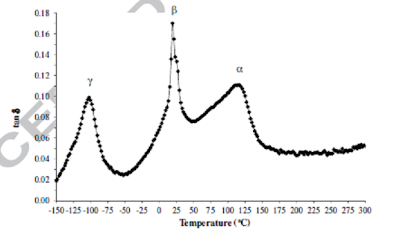 Using dynamic mechanical analysis, the authors found three transitions which they labeled, α, β and γ. The β-transition they quickly identified as a crystalline rearrangement based on existing research. Sadly, both temperatures for both the α- and γ-transitions showed strain rate sensitivity. I say sadly, as one of the unofficial, non-theoretically-derived observations of the glass-transition is that it is always sensitive to the rate of measurement. If either the α- or γ-transitions had NOT shown this sensitivity, one would have to believe that it was not the glass transition. 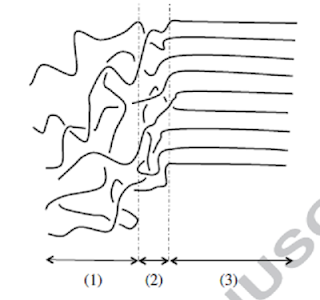 Ultimately the authors propose the existence of 2 amorphous phases as shown in this illustration. One is mobile (labeled as "(1)") and one is rigid (labeled as "(2)" with the crystalline regions labeled as "(3)"). These are believed to correspond to the γ- and α-transitions respectively. The authors ultimately then decide that the γ-transition is the "real" glass transition.

This is all a little too much hand-waving for me. This is just a souped-up version of the fringed micelle explanation for polymer crystallization, something we seen discussed here before. The boundary between the mobile and rigid phases is visually clear in this drawing, but how can that be objectively stated?

Ultimately I do feel that the γ-transition is the glass transition for a number of subjective reasons (the temperature range, and that is it below the crystalline transitions), but the explanation of it is still beyond our current understanding, and I certainly don't buy what is being sold here. So what is the mysterious α-transition? Well, it's complicated...


[1] Teflon is actually the Trademark from Dupont for their PTFE. Other companies have their own trademarks for their own PTFE.

[2] 327 oC, but take that with a grain of salt. Even molten, PTFE doesn't flow like normal polymers, and adding more heat only degrades it that much faster. It's not surprising that LinkedIn had a recent discussion on whether PTFE is a thermoplastic or a thermoset. "Melting" PTFE is not like melting most other polymers.

[3] A fluid will wet a surface if it has a lower surface energy than the surface. PTFE has the lowest surface energies of all polymers (~ 19 dynes/cm2), while the metals of the fry pan are hundreds if not thousands of dynes/cm2. In other words, the PTFE can't help but stick to the metal. That also explains why nothing else sticks to the PTFE - practically anything else has a higher surface energy. (There is more to adhesion than just wettability, but that is a critical starting point - no wetting, no adhesion.)
Posted by John at 8:14 AM

This article is a good explanation why Teflon makes a poor helium leak standard. With a characteristic material change near room temperature you never know what you are going to get for a helium permeation rate.