Some Good News for Plastic Waste in the Ocean Gyres

One of the unresolved quandaries of the 5 Ocean Gyres (a.k.a., the Garage Patches) is that despite increasing uses of plastics by civilization, the amount of plastic in the Gyres seems to be constant. There is some "sink" that is yet to be identified. A new research paper published in Environmental Science and Technology (C & EN review article) has identified a previously-unidentified, potential sink - bacterial degradation. 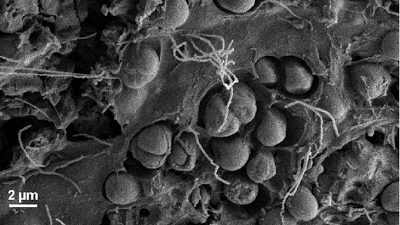 The researchers took polyethylene (PE) and polypropylene (PP) samples, threw them under a microscope and saw what is on the right side of this page - microbes and pitting matching the microbes. This was surprising as these polyolefins are not normally considered biodegradable. The authors note that many of the genera present are those that consume petroleum. I also suspect that other genera are initially eating the various other chemicals that are adsorbed on the substrates. There may well be interactions between the various species in the community. (One thing I learned after working for 4 years with food microbiologists is that microbiology and microecosystems are never easy to study.)

Most of the article focuses on discussing the bacteria found on the plastics, their relative numbers (another surprising result was that the populations of the various microbes were evenly distributed rather than being dominated by just a few species as occurs in most environments), and differences between those ecosystems on the plastic and in the surrounding seawater.

So does this mean that we can continue to happily dump plastic in the oceans knowing that "the bugs will eat it"? No. Not in the least.

This research has left a lot of unanswered questions. It only looked at samples from the North Atlantic Gyre, and so we have no idea how things differ in the other Gyres. It didn't measure the degradation kinetics, so it can only be speculated that this is the mystery "sink" where all the plastic is disappearing. (If the bacterial degrade the plastic waste more slowly than we are adding it, then we don't have the mystery solved.) We don't know what the degradation chemicals are (beyond the standard CO2 and O2). And we also don't know what the effect of this micro-ecosystem is on the larger ecosystem. Many of the bacteria were of the Vibrio genus, one that can often be toxic to humans and other mammals when eating seafood. Encouraging increases in their population can't be a good idea.

But even if these concerns are resolved and it is found that this is the mystery sink and that the ocean environment is actually better because of the microbial degradation, I will still state what I have always stated: waste plastic has no business being in the ocean. Pick it up, people. Put it in the trash or recycling bin and act like you're a responsible grownup.