The Added Dangers of A Fire at a Plastics Plant

There was a large fire at a plastics recycling plant in Sheffield, England on Sunday. Fortunately, no one was injured. The BBC has some pictures of the thick, black smoke.

Fighting fires of burning plastic can be a rather hazardous challenge, far more than fighting just a wood fire. While the theoretical combustion products of most polymers such as polyethylene, polypropylene, polystyrene, polyester and even polycarbonate are the fully-oxidized molecules of H2O and CO2, that is seldom the reality. Instead, fires of a pile of plastic destined for recycling are usually an oxygen-starved environment, and goodly amounts of CO and smoke particulates will also be produced. The carbon monoxide is a rather toxic gas and the particulates obscure the vision of the firefighters. Looking at the pictures, you can only imagine how blind the firefighters would have been had they attempted to enter the building. 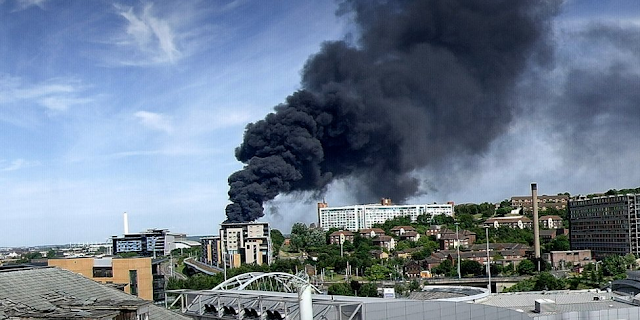 But these are the simple cases where the polymers are made of just hydrogen, carbon and maybe oxygen. Once the plastics start having additional elements in their makeup, the byproducts of incomplete combustion become far more serious. Consider nylon and polyurethanes where the nitrogen atoms become part of hydrogen cyanide gas. Or vinyl (polyvinyl chloride), which gives off HCl as it burns [*]. And heaven help you if there is burning Teflon around throwing off HF. I've only named the largest components from the incomplete combustion - a whole plethora of gases too numerous to name are produced in lesser quantities. Since this plant in Sheffield was recycling a wide range plastics, they probably had onsite most of the polymers listed here and maybe some others not listed.

These are all hazards of fires in modern structures and something that firefighters face nearly every time there is a call (wild fires being the notable exception). Buildings are not just made of wood. Instead, a variety of materials are found inside, many of them plastics and rubbers, all of which give off these hazardous gases that are arguably far more toxic than the standard concerns of heat, smoke and carbon monoxide. All of which is another reason to appreciate the people who respond to our calls for help.


[*] I once worked at a facility that processed lots of vinyl and so the operators all received special training for fire fighting. My special training consisted of being told to quickly get out the building and taking as many people along with me as I could. Fortunately, that training was never applied.

Email ThisBlogThis!Share to TwitterShare to FacebookShare to Pinterest
Labels: fire