Limits to Innovation in F1 Racing

A few weeks back, I wrote about how the rules for the construction of the America's Cup yachts stifled innovation and worse yet, were often unenforceable. I decided to see if F1 race cars suffer the same fate.

I am already willing to give considerable leeway to the F1 organizers since they are under different constraints than America's Cup. Like most racing events (automobiles from F1 down to go-karts, bicycles...) , the construction rules are rather conservative. The latest and greatest technologies are seldom used as such technologies are usually expensive. The organizers of the sporting events realize that it is preferable that all the participants have more-or-less equal equipment, rather than letting the richest teams blow out the field. You see this in American Football as well, where revenue sharing and salary caps make it impossible for one team to buy up all the best players. Baseball does not have these constraints and so you see teams that dominate and also perennial cellar dwellers. (I'm not a soccer fan, but I do have the feeling that there are certain teams that can and will pay money for the best players. They consistently do well while the others suffer.)

Additionally, the race courses that are used are built around the current speeds of the cars. If the cars could suddenly run 50% faster, the safety of the drivers, support teams and the audience would suddenly be a concern, and considerable modifications to the courses would have to be made at no small expense. A similar situation exists in golf. If golfers - including this hack duffer - could suddenly hit their tee shots 50% further, all the golf courses of the world be obsolete.

Despite stifling innovation, the rules do serve a greater purpose. Managing innovations in sports is a tricky issue that requires a delicate hand. Too little and people complain, but too much destroys the nature of the event. However, these constraints hardly apply at all to America's Cup, where the races are held only every 3 years, the rules are changed for each race, and the owners are fabulously rich. Blowing out the opposition would only further stoke the ego of these owners, and that's why I was so hard on them. 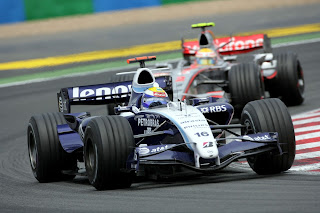 I read through the FIA technical regulations rules and was pretty impressed with them. First off, these are extremely high-tech cars. Given all the telemetry, accident recording systems, etc., I get the feeling that these cars, even at race speed, are safer than any of than any car moving along the freeway. Secondly, all of the regulations appear to be enforceable. There are no nonsensical stipulations about mold pressure or limits on processing temperatures. Third, some of the rules are extremely technical. Consider this one about body deflection which almost seem ripped from an undergraduate mechanics textbook:

"3.17.1 Bodywork may deflect no more than 10mm vertically when a 1000N load is applied vertically to it at points 675mm and 975mm forward of the front wheel centre line and 720mm from the car centre line. The load will be applied in a downward direction using a 50mm diameter ram on a rectangular adapter measuring 400mm x 150mm."

Article 15 has most of the details on materials of construction. All sorts of fibers are allowed for reinforcement, including polyethylene, polypropylene, aramid (i.e., Kevlar), and carbon fibers. Surprisingly, only the carbon fibers have any restriction on their modulus - all other fibers are unrestricted. The only restriction I thought a little odd was that thermoplastic and thermosets could only be reinforced with short fibers. Long-fiber reinforcements are becoming rather commonplace, and to really rub it in the eyes of F1, they've been used on golf carts for 10 years. So I was surprised that they were not allowed. But other than that, the rules appear to me to be nicely balanced and well written, allowing innovation at an appropriate pace. (I probably need to don a fire suit now for all the flaming comments from F1 fans who disagree with me!)