The Pitch Drop Experiment for the Impatient

Inspired by the infamous Queensland Pitch Drop Experiment and the Johnny-come-lately Pitch Drop experiment at Trinity University, Andy Gibson (@Lopek) created his own version of the experiments using Silly Putty, and then tweeting about it. The result has been put together in Storify and it is pretty interesting to look at. Here are my comments on what is occurring as the experiment proceeds. Rheologically, of course.

First off, I am not commenting on every single picture available, just certain key elements. Also, note that the geometry chosen has a major influence over what you see. If the funnel was higher off the desk, the results could vary. The same goes for the diameter of the outlet (more about that specifically in a minute), the slope of the funnel and the amount of Silly Putty used. Temperature would also affect the results, but I'll leave that topic for another day (if ever!). Change any of these and you could generate completely different images. There is another geometric variable that would be interesting to see sometime too, but I'm not going to mention it now. I'll try and set up the experiment myself and then expand on that topic. 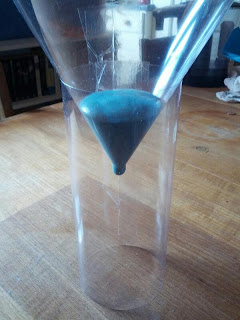 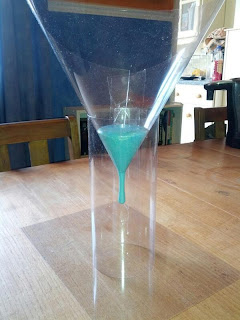 Picture 2 shows that the droplet is extending itself. Because the silicone chains in the Silly Putty are entangled, it is difficult for them to disentangle and allow for a droplet to break off, unlike what happens with Newtonian fluids such as water. The cross-section of the drop is still round because of surface tension, not just because the opening of the funnel is round. 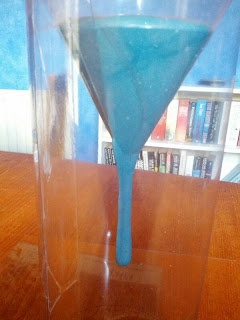 Picture 3 shows that the funnel is starting to fall apart slightly and it is claimed by the photographer to not make a big difference. Hogwash. For flow in a pipe, the flow rate (at a given pressure) is proportional to the fourth power of the diameter. A 2 inch pipe carries 16x as much water as a 1 inch pipe. Even a 10% increase in the diameter will lead to nearly a 50% increase in flow. And that's just for shearing Newtonian fluids. Non-Newtonian fluids in extensional flow are going to be that much worse. However, since we are just making qualitative observations here, we still can get some great insights into rheology despite this uncontrolled variable. 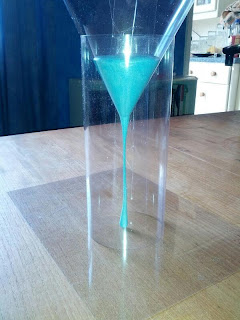 Picture 4 shows an highly elongated "drop" which occurred by "sudden stretching". Notice how the drop is thickest at the bottom and thinnest at the top. The material is under the greatest stress just below the outlet as it has all of rest of the drop pulling down on it. The stress is lessened by the elongation of the Silly Putty. As the elongation develops, the silicone chains are able to more easily slide past one another, allowing for the "sudden stretching". 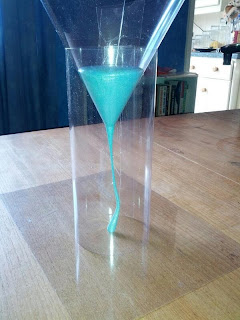 Picture 5 shows the drop "falling over". This is because the inertia of the fluid below the outlet is forcing it downward, but the bottom of the drop has stopped moving. The drop is no longer being pulled apart, but instead is being pushed together. Just like pushing a rope, it bends rather than compress. 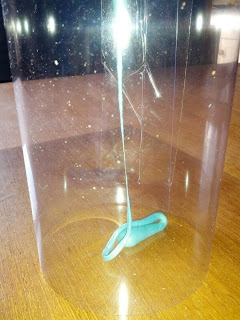 Picture 6 shows the "drop" continuing to fall, but it is getting thinner and thinner. 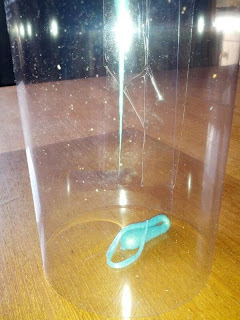 Eventually it becomes too thin and breaks entirely as you see in Picture 7. 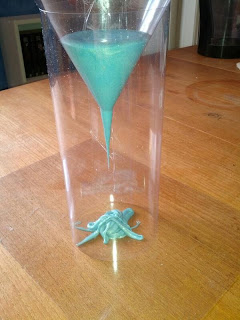 Picture 8 is quite a bit later after several drops have fallen. Notice how you can still make out their existence at the bottom. So while the Silly Putty in the funnel is acting like a fluid, the material at the bottom is acting much more like a solid and not flowing back together. There is simply not enough mass and/or shear present to stress the putty enough to cause it to flow quickly.

Experiments such as these are a gobbled-up mix of shear, elongation, surface tension and other forces at work, all being influenced at different rates. You should see some similarities with the Pitch Drop experiments, but as the geometries of the funnels and the rheology of the materials are different, there is not an exact 1-to-1 correspondence.