Is This Really Self-Healing?

Self-healing materials are growing rapidly in popularity, at least as far as research topics go. I mentioned one example a couple of weeks back that was pretty impressive , but a new paper doesn't even come close to reaching what was achieved previously. (More on that in a minute)

From the well-respected Matyjaszewski group (a perennial candidate on Chembark's Nobel Prize predictions) comes this offering: "Introduction of self-healing properties into covalent polymer networks via the photodissociation of alkoxyamine junctions". The chemistry is also very trendy using not only ATRP (this is the Matyjaszewski groups after all) but also "click" chemistry [1] to build up a network with alkoxyamine junctions. The paper goes into extensive detail (lots of Electron Spin Resonance spectra) about how UV light can be used to breakdown the network thereby increasing the mobility of the chains so that additional UV light can be used to reform the network. 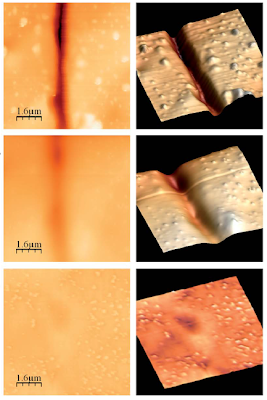 So I'm reading all of this, getting pretty excited until it is time to for the research to deliver the knockout punch - show me that this stuff self-heals! And for that, you get to see the set of photos on the right. The top set shows a "scratched" film [2], the second set shows the film after 2 hours of radiation, and the third shows the film after 24 hours of radiation. But that's all you get. No evidence that the mechanical strength of the film is x% of the original or anything else along those lines.

I don't think this paper was refereed very well. The chemistry aspects are all spot on, but when you are talking "self-healing", emphasis needs to be placed just as much on the mechanical properties and how much they recover after the healing is over with. This paper really falls short in that manner, and as I noted in footnote 2, it can be questioned if there was any damage that needed healing in the first place.

So is this polymer really self healing? At this point, I'm not convinced in the least.

[1] For crying out loud, polymer people, can we decide on what "click" chemistry is? Half the world wants it only refer to the the copper-catalyzed alkyne/azide cycloaddition reaction, (as is the case in this paper that I'm discussing) and the other half wants to include thiol-ene, Diels-Alder and a whole host of other reactions such as was originally proposed by Nobel Prize winner Sharpless. [†] I prefer the latter option myself, but more importantly, I prefer that we make a decision and stick with it.

[2] Scratched? They put 600 nm indentations into the film using an ATM in tapping mode! Scratched? Wouldn't compressed be a better word? I'm struck by how the "scratch" fills in from the bottom up (as you would expect from elastic rebound), even though the top of the coating receives the most light and should therefore heal faster. Maybe it is a scratch, but you better prove it, or at least make one in a more conventional manner that isn't open to questions.

[†] You don't suppose that the difference in usage is what sets off the Nobel Prize winner from the wannabe, do you?

The tip scratching actually works quite Ok. I used it often to determine the thickness of a polymer film at a specific location. One indeed can do it with tapping mode tips which have larger spring constants (40 N/m) than contact mode tips. In the main text they write that they do it in the tapping mode and this sound weird but in the experimental section they mention that they actually turn the feedback off. Not sure why they do it like this. One can engage the tip in contact mode, scratch and then image in tapping mode.

One important point - when I did the scratching, the scratched out material had to go somewhere. Most of it went to one side of the scratch due to a slight asymmetry in the shape of the AFM tip (think of a plough). In the paper it indeed looks like the material is pressed (which one may also call "scratched") rather then removed, especially when I see the curved edges of the scratch. But then indeed there will a problem with the "healing" part of the paper.

Most of polymer scientists I know think of "click chemistry" according to the Sharpless definition.

I think Nikodem is basically right (I've done many of these AFM-scratching experiments myself). The AFM results in the scratch test are usually more-or-less proportional to the results obtained in microscratch methods, and those results correlate well with the bulk Shore and Rockwell hardnesses of the materials.

In defense of the work here, you can see the pile-up of displaced material characteristic of a "real" scratch at the edge of the first two AFM images.

I completely agree with your points about "click" chemistry and recovery of the mechanical properties.

Okay, it's not a slam dunk (24 horus at 120 mW/cm2 is quite a dose), but not every paper can be. The chemistry is interesting and the paper may provide a springboard for subsequent, higher utility research.

You're absolutely correct, however, about the need for more experiments. Even if the film was scratched (not compressed) and there is observable "pile-up of displaced material," of which I remain unconvinced, more experimentation and better controls would be warranted.

Thank you all very much for your comments. I've never done anything with an ATM, but still felt that that there was something fishy here, even as much as I greatly respect all that K. Matyjaszewski has done for polymer chemistry.

(Sadly, I've refereed papers from research groups that you would think would be beyond reproach [OH! I AM NOT WORTHY] and still had serious issues that anyone would agree with, so I've learned not to just kowtow to a name.)

As (some of) you have mentioned,I do think that it is a clever, inventive chemistry and as always, a novel approach serves as a launch board for future developments.

It's just that
1) we all know that "self-healing" polymers are a very sexy topic nowadays (especially if you use "click" chemistry too!), and
2) there is an appalling lack of evidence that this material is "self-healing" in any significant manner. OK, so an indented ATM line will fix itself; what about a "real world" scratch? Or a ding from an impact (say a golf ball or a rock thrown up from a truck-wheel or a hailstone or a...) That is what ultimately counts.

Can we get there from here? I don't know, but I also wouldn't bet against this. (It is K. Matyjaszewski after all.) But for proof of concept, this falls far, far, far short of the line. The emphasis was ALL on the chemistry and nothing was on the mechanical properties.

If you are going to win with a self-healing polymer, the emphasis, needs to be, nay, is required to be on the mechanical properties.