The Cassini space probe, now orbiting Saturn, made unexpectedly huge waves in the news when it was announced that it had discovered propylene in Titan's atmosphere. What's the big deal with finding propylene? Nothing, nothing at all, other than as a scientific curiosity. So what's all the hoopla about? Because the press release, repeated ad infinitum without modification was that PLASTIC had been found in space. Here's some of the guilty parties: 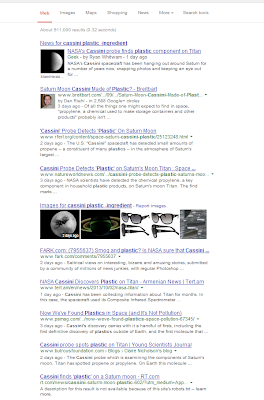 Even more agencies ran with the "plastic in space" headline, only to later note (correctly) that propylene is not a plastic but on an ingredient in plastic.

But why all the fuss when the discovery of unsaturated hydrocarbons that are used in making plastic is old news. As Redorbit reported,

"The Voyager observations found all possible affiliates of the one- and two-carbon families in Titan’s atmosphere. However, the spacecraft only found propane and propyne from the three-carbon family, meaning the middle chemicals, including propylene, were missing."

So we already knew that ethylene, acetylene and propyne - all of which are polymerizable monomers - existed in Titan's atmosphere, at yet those materials were never called "PLASTIC IN SPACE". So why now with propylene?

" 'This measurement was very difficult to make because propylene’s weak signature is crowded by related chemicals with much stronger signals,' said Michael Flasar, Goddard scientist and principal investigator for CIRS."

Again, this is a scientific curiosity and nothing more.